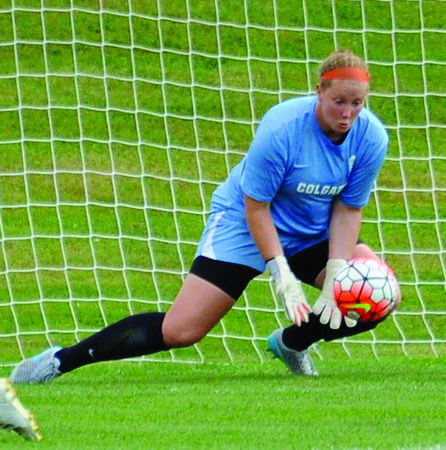 Senior goalkeeper Erin Cummings made three crucial saves for the Raiders in the game against Lehigh.

To remain undefeated in the Patriot League, the women’s soccer team tied their game against Lehigh at 0-0 on Saturday, September 26.  The team’s current overall record stands at 3-5-1.

The team’s offensive struggled with finishing at the goal, while Colgate’s defense and goalkeeper, senior Erin Cummings, managed to keep Lehigh from scoring. Overall, Cummings maintained a shutout with three recorded saves during the game.

“To get the shutout is big time and it just shows that we’re making adjustments and improvements in the back. I think now we just need to finish our opportunities on offense. The positive is that we’re creating opportunities, but now we need to capitalize on those chances,” Cummings said.

Although the team didn’t manage to bury a goal from the offensive opportunities that they did generate, they had an offensive edge the majority of the game with an overall of ten recorded shots.

Senior forward Sidney Parodie and junior forward Sarah Coy both finished with three shots each, and senior captain Jenna Panepinto led the team with a total of four.

“We had a lot of scoring opportunities where we just weren’t able to capitalize. We just need to maintain our composure and focus in that final third of the field,” Panepinto said.

Panepinto does see the teamwork on the field as they continue to work on their movement of the ball and communication. The team was successful in their ability to maintain a strong relationship within the offensive and defensive sides of the field.

“I thought we did a pretty good job of connecting the defense and forwards through the midfield, and also switching the point of attack, which is something we worked on all throughout practice last week. With that being said, I thought we were able to keep our shape and play as a unit for most of the game, especially considering the extra 20 minutes we played,” said Panepinto.

With a winning streak in league games, the team is looking to maintain their record when they play Boston University later this week.

“To get a win would definitely mean a lot to our current team but also to our whole Colgate soccer family who want a little redemption from last year,”

Last year, the team lost to BU in a close game during the final round of the Patriot League Championships, so they are particularly looking for a win this week.

“We definitely still have that bitter taste in our mouths from last year and that’s great fuel for us. I expect it to be a great match up. It’s going to be fun,” Panepinto said.

Panepinto said that one of the team’s greatest strengths that will help them achieve their goal against Boston University is their winning mentality.

“We know what we can achieve and we won’t let anything get in our way of accomplishing that. We know that every game is just as important as the next. We didn’t take our non-league games lightly by any means but we do know how crucial each of these Patriot League games are. Every single one matters. There’s really no room to let up,” Panepinto said.

The team has demonstrated so far that they are capable of winning and dominating in their difficult conference. It will be very interesting to see if the Raiders can keep up their intensity and generate more offensive opportunities for the second half of their season. The Raiders square off against Boston Universty at 7:00 p.m. this Wednesday at Beyer-Small  ’76 Field and look to get a much needed victory.