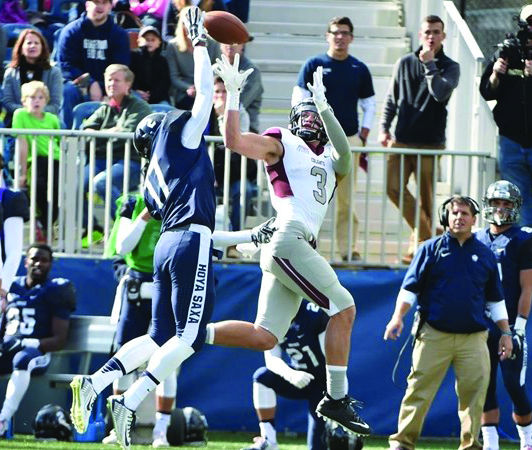 Sophomore Alex Greenawalt recorded 88 receiving yards to lead the Raiders in a victory against Georgetown.

The Colgate Raiders defeated the Georgetown Hoyas 17-13 in Washington, D.C. on Saturday. The Raiders improved their overall record to 3-4 and their Patriot League record to 2-0 to remain atop the conference. The win sets up a showdown with the 6-1 Fordham Rams after the Raiders’ bye this weekend. That matchup will take place at home during Family Weekend on Halloween afternoon.

The Raiders dominated the first half jumping out to a 17-0 halftime lead. Sophomore running back James Holland rushed for two touchdowns in his first game back from a toe injury that kept him out of their previous two games. Senior running back Demetrius Russell added 12 carries for 40 yards to pick up the slack for the injured junior running back John Wilkins who dressed but did not appear in the game. On a windy afternoon, junior quarterback Jake Melville added 14 carries on the ground for 80 yards, and Melville also completed 11 of 23 passes for 190 yards through the air.

Despite the victory, three Raider fumbles put the outcome of the game in question during much of the fourth quarter. Entering the final period with a 17 point lead, the Raiders saw Georgetown quarterback Kyle Nolan run for a 10 yard touchdown, the Hoyas recover an onside kick and kicker Henry Darmstadter kick two 37-yard field goals, his second with just over four minutes to play. The Hoyas were forced to kick that field goal after junior outside linebacker Charles Cairnie stopped the Hoyas deep in the backfield after they attempted a reverse that went no where. On 4th and 19, the Crusaders kicked the field goal but could not stop a tough Raider running game on the following drive. Holland rushed four times for 26 yards on that nine play drive to run the clock out and secure the Colgate victory.

The Raiders also got contributions from the special teams this week which had been their downfall in the week prior against Princeton. After botching two field goal attempts against the Tigers, junior kicker Jonah Bowman knocked in two extra points against the Hoyas and a decisive 39-yard field goal into the wind that gave the Raiders the 17-0 lead as time expired in the first half. Bowman acknowledged his recent struggles and his bounce back game when asked about the kick.

“Oh, it felt really good, especially with all the struggles we’ve had this year. To finally come back and put one through the uprights felt great,” Bowman said.

Saturday’s game was the fourth straight road game for the Raiders. Colgate won three of four on the road trip and remained in first place in the Patriot League. Most importantly, the Raiders have stayed predominately healthy during that stretch. While junior lineman Grant Siegel missed the game due to a knee injury that kept him out of practice for much of the week, the Raiders saw sophomore lineman Ryan Paulish return from a high ankle sprain that kept him sidelined the last few weeks. The Raiders will have two weeks to get healthy in time for a monumental matchup against Fordham. If the Raiders can defeat the Rams on Halloween afternoon, the Raiders will put themselves in the driver’s seat to claim their first Patriot League title since 2012.