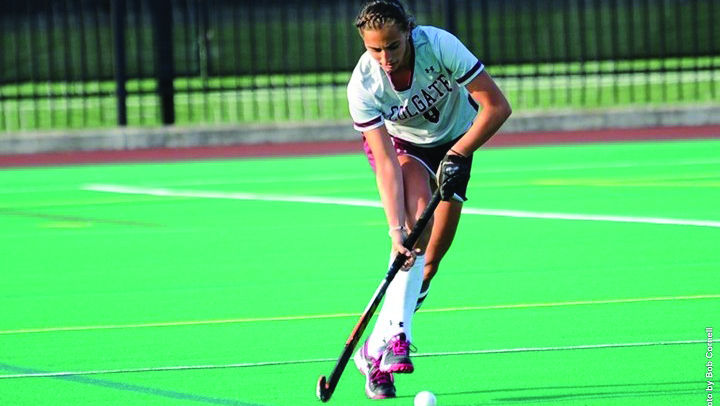 Senior captain Lindsay McCulloch attempts to get the ball out of Colgate’s defensive zone and generate some offensive opportunities.

The women’s field hockey team was back on the road last Sunday, taking on Patriot League rival Bucknell University in Lewisburg, Pennsylvania.

Although they battled hard, the Raiders were unsuccessful in their campaign, losing 6-0 to the Bison. This loss caused Colgate’s record to fall to 0-11, while their Patriot League record moved to 0-3. The victory allowed Bucknell’s record to move to 4-6, with their Patriot League record moving to 2-0. The Bison got a quick jump on the visiting team by scoring their first of six goals just five minutes into the competition. The goal was scored by senior forward Abby Watson, and was assisted by senior forward Kiersten Sydnor.

Bucknell increased their lead 20 minutes later when junior forward Emma Fitzgerald scored her first goal of the season off of a shot from the top of the circle. Though Colgate continued to battle defensively, the home team managed to extend their lead further when Watson scored her second goal of the game, finding the back of the net following an assist from first–year midfielder Claire Lesher.

In the 38th minute, first–year forward Nicole Rupnik put another point on the board for Bucknell, deflecting a shot from junior midfielder Kelsy Kauffman. A minute later, Sydnor was able to penetrate Colgate’s defensive line and carry the ball into the circle before scoring her first goal of the game unassisted. A short time after, Sydnor scored again, tallying another goal which would be the last of the game. Although the Raiders were unable to put any points on the board, they continued to work on improving their game and overcoming the challenges they have faced since the start of the season. Sophomore forward Miranda Scott had some positive thoughts after this game and was determined to keep her head up.

“It’s inspiring to be on a team where there is still so much positivity despite the score of the game,” Scott said.

When asked about the team’s overall mindset as the girls make their way through the latter half of the season, Scott also had some very positive things to say about the team and their struggles this season.

“We work hard everyday in practice and rally off of each other’s energy,” Scott said.

While struggling to move the ball in between defensive and offensive lines, the Raiders made significant strides to overcome the obstacles they have faced throughout the season, most notably on the defensive end.

Sophomore goalkeeper Maria Krull started the game in goal and managed to record seven saves. In the 41st minute, first–year keeper Jacqueline Li replaced Krull, putting in her fourth appearance in a collegiate contest and recording one save. Additionally, senior defender Lindsay McCulloch recorded a defensive save, the first of her collegiate career.

Junior forward Whitney Jones, sophomore midfielder Cady Kopsky and sophomore midfielder Caroline Schaefer led Colgate’s offensive line by each recording one shot on goal. As the Raiders move into the tail end of the season, they will face a challenging schedule in the upcoming weeks, with three of their four remaining games against Patriot League contests. Despite their struggles, Scott says that the team continues to maintain high moral.

“[We maintained] good morale… and the mentality that we are all playing for each other and not for ourselves,” Scott said.

The team will return this Saturday as it hosts American University at Tyler’s Field at 12 p.m.