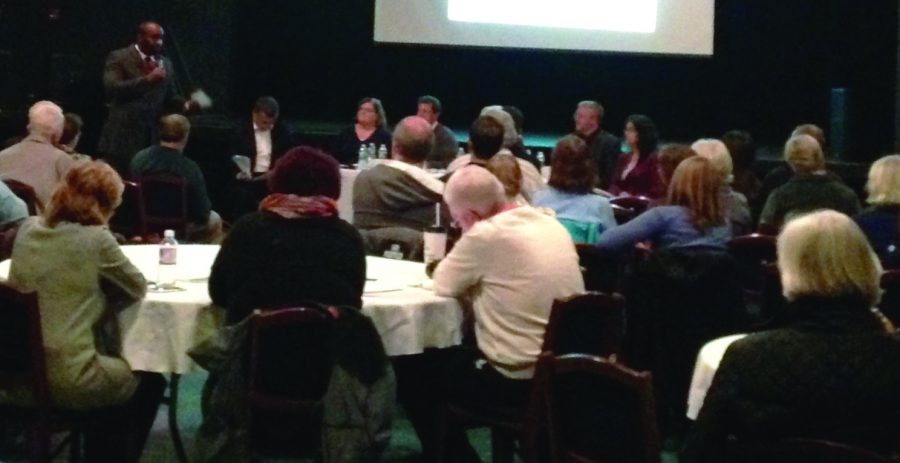 Professors gathered to discuss their reservations about the Common Core.

Within New York state and across the United States, the idea of Common Core standards has been a highly contested subject, raising concerns from parents and teachers alike. On Thursday, October 15, Colgate’s Center for Freedom and Western Civilization hosted a debate at the Palace Theater in downtown Hamilton to address the conflicting views on the Common Core implementations. The debate was titled: “The Common Core: Is it Good for Students and Teachers?” New York State has adopted the Federal Government’s new Common Core learning standards, which are more rigorous and have been designed by administrators, teachers and educational leaders from all over the country. This standardized learning system has caused controversy, as states are forced to adapt to it or suffer the consequences of budget cuts.

The event was led by Professor of Political Science and Director of the Center for Freedom and Western Civilization Robert Kraynak, who was interested in moderating a debate on an issue that parents and teachers feel passionate about. His goal was to bring the discussion down the hill, to the Palace Theater, in order to facilitate a conversation between residents of the local area and members of the Colgate community.

“Common Core is one of the most significant policy issues, but its importance is not shown because it has not become a part of the debates or worked its way into the political cycle as much,” Kraynak said.

Despite the positive sentiment expressed in regards to the Common Core, it is largely communicated by faculty, staff and parents that the implementation has been difficult. New York supports teachers in learning the standards and transitioning curriculum to meet these new measures. Unfortunately, students were tested on the new standards before that work was done, and teachers were valuated on students’ test scores. Some of the panelists argued that it is ridiculous to have job evaluations tied to the new standardized tests.

Many who oppose the Common Core believe the issue goes deeper than implementation. They deem Common Core a radical new program imposed on teachers who had no role in developing the standards, arguing that the federal government is stepping far outside its limits. While some people opposing the Common Core argue that education should be controlled locally so that every population can have a fair chance, others insist that through this standardization, the Common Core eliminates literary reading, cuts down on literacy and reduces writing skills.

The panel consisted of Associate Professor of Educational Studies and Chair of the Department of Educational Studies John Palmer, Norwich High School English teacher Jennifer McDowell, Sherburne-Earlville Schools retired English teacher Gary Weeks, Hamilton Central Schools math teacher Sue Lehman, Staff and Curriculum Development Specialist at the Madison-Oneida BOCES Jonathan Cornue and Mary Grabar of the Alexander Hamilton Institute. Each panelist described their perspective on the Common Core and how they saw its implementation within the education system; some described how they felt it affected their own personal roles as teachers.

While some of the panelists seemed to have mixed feelings about the new standards implemented through the Common Core, Palmer took a strong stance in opposing them. Disagreeing with Palmer, Cornue argued in favor of the standards, seeing them as a fairly harmless means of trying to increase student achievement. Graber and McDowell also seemed to see the standards as highly problematic, with McDowell arguing that the modules that the state expects teachers to use are unrealistic.

Lehman described how, while standards might not necessarily be bad in and of themselves, the evaluation of teachers based on these standards can be harmful. Weeks seemed to concur with this idea, yet he made sure to note the effort his school district has made in training teachers to meet these new standards. He noted how the speed at which teachers were made to learn these standards was part of the problem but did not seem to take issue with standards themselves.

After the panelists presented their personal understandings and viewpoints of the implementation of the Common Core, the discussion was opened to the audience to ask questions. Members of the community voiced their opinion, responding to one another and the contributions made by each panelist. It was clear from the audience members’ responses that the Common Core is a topic that is on the minds of many community members. Several parents spoke up, as well as a former teacher in the audience, to voice their own perspectives on the implementation of Common Core standards and how this aligned with or disputed what was conveyed by the panelists.

Junior Virginia Moore commented that the Common Core suppresses individuality and does not allow students to express themselves. Junior Manny Medina, an education major, said that he attended the debate because he was interested in hearing both sides of the argument. Still, he concluded that he does not agree with the implementation of the Common Core.

“I think it is a problem when an educational firm creates a monopoly over test production prep and grading, like [Pearson]. I do not think it is an inclusive educational model,” Medina said.