Tension in Syria Extends into the International Community 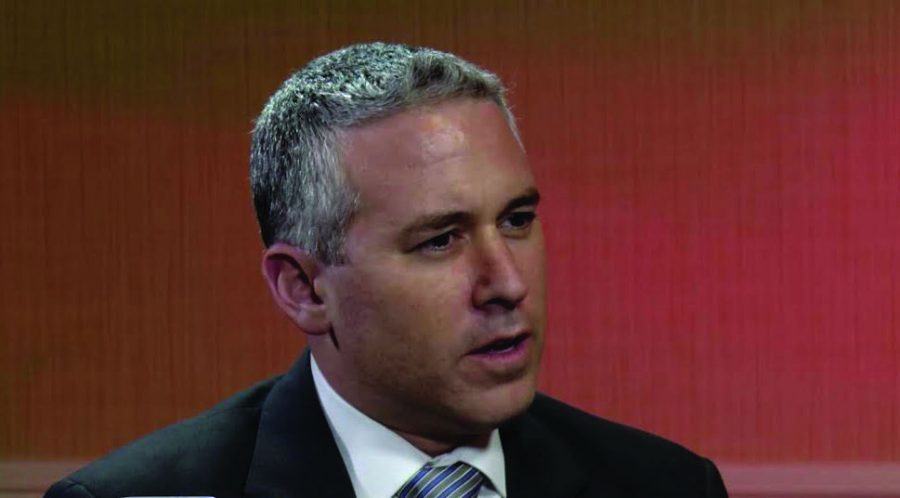 Schanzer stressed the importance of the Syrian conflict, though it is often overlooked by media outlets in the United States.

On Tuesday, October 20, Middle East Policy Expert and Vice President of Research at the Foundation for Defense of Democracies Jonathan Schanzer gave an interactive lecture outlining the current political instability in Syria. The format of Schanzer’s presentation was split, consisting of Schanzer lecturing for half of the presentation and fielding questions from audience members for the other half. The lecture took place in Love Auditorium.

Prior to his position at the research foundation, Dr. Schanzer worked for the Office of Intelligence and Analysis at the United States Department of the Treasury and the Washington Institute for Near East Policy. He earned his Bachelor of Arts from Emory University, his master’s degree in Middle Eastern studies from The Hebrew University of Jerusalem and his doctorate from Kings College London. Schanzer has also authored many works on Middle Eastern conflicts, including his most recent project, “State of Failure: Yasser Arafat, Mahmoud Abbas and the Unmaking of the Palestinian State.”

Schanzer began his lecture by looking into what the violence in Syria has meant for the Syrian population and other Middle Eastern populations involved in the conflict. Schanzer informed the audience that the violence ignited by the Arab Spring in 2010 has resulted in over 250,000 casualties, four million externally displaced Syrian refugees and six to seven million internally displaced Syrian refugees. According to Schanzer, this issue is entirely overlooked in the United States, as it is rarely the topic of top news stories.

Schanzer formatted his lecture by splitting the Syrian conflict into three categories: evolution of the conflict, actors involved and U.S. foreign policy. He mentioned three major extremist groups that currently occupy Syria: ISIS, al-Qaeda and the Democratic Union Party (PYD). Their initial goal was to oust Bashar al-Assad, the current Syrian President. Schanzer spoke in detail about the Assad regime and its control over Syria since the early 1970s.

“Syria has remained the state sponsor of terrorism throughout the regime,” Schanzer said.

On the topic of removing Assad from office, Schanzer spoke about the United States’ willingness to aid this effort. He mentioned how representatives of the Free Syrian Army visited Washington, D.C. with the hope of securing support from the U.S. government. According to Schanzer, the federal government was hesitant to provide aid based on the violence that has resulted in attempts to overthrow autocratic leaders and implement democracy in recent U.S. history.

“We elected a president whose campaign platform centered on getting out of war and not getting into any more,” Schanzer said, referring to President Obama’s presidential agenda.

On top of the previously mentioned groups pursuing this political agenda, Schanzer mentioned that there are over 1,000 fighting factions and that their agendas not only focus on political aims but involve religious motives as well. As a result of the highly fragmented nature of the violence, Schanzer mentioned his prediction that Syria will be subject to extreme restructuring in the coming years.

“It is very likely that Syria as we know it today will not exist in the future,” Schanzer said.

He then spoke about Turkey in great length and its role in fueling the violence in Syria.

Schanzer mentioned the weakly defended southern Turkish border as the main avenue for supplying the radical groups with weaponry. As Turkey begins to realize the seriousness and continual nature of the issue in Syria, it has looked to the United States for aid.

“We are helping them put out the fire that they started,” Schanzer said.

“I thought it was interesting that Dr. Schanzer spent a lot of time talking about Turkey’s role in the conflict and that Turkey will be the next place of instability,” James said.

Schanzer also mentioned Russia as a newly engaged actor in the conflict. According to Schanzer, President of Russia Vladimir Putin is looking to come to the rescue for the Syrian regime as it faces these hostile radical groups.

“If he can win this for Assad he will be able to extend his power anywhere in the region, taking advantage of the vacuum,” Schanzer said.

Schanzer discussed how the Syrian issue has escalated into a conflict that encompasses so many international, religious, political and tribal rivalries that it can no longer be easily resolved.

Sophomore Bruce Racine attended the lecture, and mentioned how the discussion gave him a greater sense of what is going on in Syria.

“Going into the lecture I had a basic understanding of the conflict, but had no idea how serious it is now,” Racine said.

After addressing questions from audience members, Schanzer spoke about the process of “de-conflicting” and mentioned that the Foundation for Defense of Democracies, the think tank he works for, attempts to come up with possible solutions to the ongoing conflict.

“Sometimes wars are won through simple ideas, not through complexities,” Schanzer said.