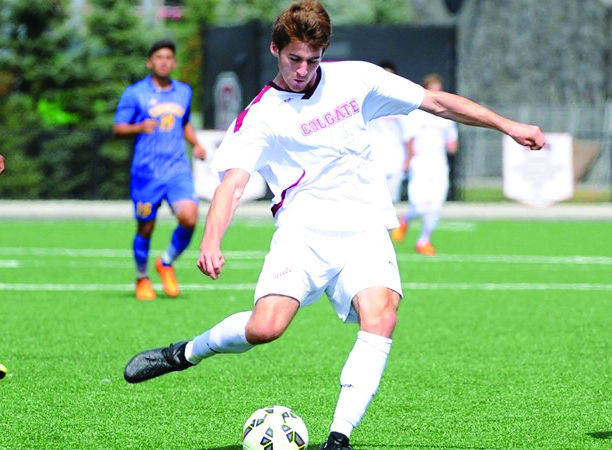 After a tough stretch at the beginning of October, men’s soccer came back this week and showed why they are the most electrifying fall sports team. Nearing the end of the season, it is a critical time for the squad, but the pressure has not gotten to them. They have risen to the challenge. More so than any other season in recent memory, the men’s soccer team has consistently had unifying victorious efforts.

In one of the biggest thrillers of the season, the Raiders started the week off against the formidable Hartwick Hawks (7-4-3). A fast paced start to the game found Hartwick scoring three minutes in, but this was quickly neutralized by senior captain Tyler Forbes who responded with an equalizer off an assist from team scoring leader, junior forward Ethan Kutler. It seemed clear from the onset that this was going to be a high scoring affair, and fans were not disappointed. A 21st minute goal from the Hawks had the upstate opponents excited about the prospect of victory, but this was quickly quelled by back to back goals from Patriot League rookie of the week Aram Ouligian off another assist from Kutler, and a Kutler goal off an assist from Forbes. The lead was short-lived, however, due to a Hartwick penalty kick that had both teams going into half time tied 3-3. While the second half was not as exciting with zero goals scored on both sides, the match ended up going into Colgate’s second double overtime Colgate’s second of the year. Ultimately, the game ended without another goal at a 3-3 tie, but five shots for both teams in between the two added periods made for a hard fought draw and a nail biter to say the least.

The men in maroon and white had a much different result in their second game of the week against Patriot League foe, Navy. Tied at nine points in the league table going into the game, the importance of this match could not have been overstated. The winner would gain full possession of the number 2 seed in the league and the loser would drop three valuable points. A 0-0 first half left both teams tense and looking for their first scores but only one team scored. In the 67th minute, it was star forward, Kutler who gave the team some breathing room as sophomore forward Jared Stroud provided the give and go assist. The goal put Colgate on top and was the eventual game winner. Junior goalkeeper Ricky Brown, junior midfielder Colin O’Neill and senior forward Nick Rizzo also played great games. Brown recorded his fourth shutout of the season and his third of October, O’Neill put three balls on frame and provided countless opportunities and Rizzo produced great defense and the counterattack that led to the go-ahead goal. The key to the Raiders’ victory was their high percentage shooting which featured 55 percent of shots on goal compared to Navy’s measly 22 percent (although they had more shots in general) coupled by a strong defensive showing. The Raiders came out on top. Head Coach Erik Ronning was pleased with the Raiders’ efforts against Navy.

“Today’s game had a playoff-like atmosphere with both of our teams sitting on nine points. Going into the game we treated it as such, and the guys really stepped up. We were patient, disciplined and knew that if we stayed strong defensively, we would find opportunities to score,” Ronning said.

With only three regular season games remaining, all in the Patriot League, nearly every team finds themselves in control of their own destiny. Sitting at number 2 in the league and one point behind the leaders, BU, the men’s squad finds themselves with a big target on their back and a favorable chance to win the league for the first time since 2011. After a midweek matchup at Army, the Raiders’ next home game is their family weekend match on Halloween Saturday at 4 p.m. against Loyola. Be sure to join the squad as they make their run at the top spot in the Patriot League.