NASC Department Looks Toward the Future 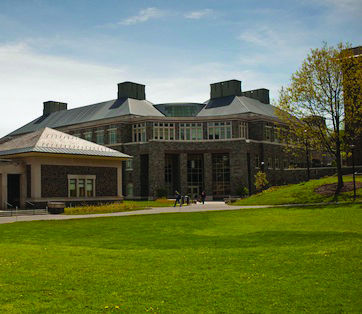 Faculty members of the Natural Sciences and Mathematics department met to discuss growth and diversity.

The division of Natural Sciences and Mathematics (NASC) met on Friday in Meyerhoff Auditorium of the Robert H.N. Ho Science Center to welcome new faculty members and discuss new initiatives, recent successes and some of the challenges facing the division in the future.

Raab Family Chair and Professor of Biology and Director of the Division of NASC Damhnait McHugh led the conversation, the first in a series of colloquia planned for the year to bring together faculty from all of the

“Really it’s a catch-up for the division,” McHugh said. “What are the big issues, what are the big successes, the big challenges and how is everyone doing

before we kick off the year?”

The division has grown substantially in recent years, with the percentage of Colgate students majoring in NASC departments jumping from 25 percent of the student body in 2007 to 37 percent in 2015.

The Robert H.N. Ho Science Center, which opened in 2007, is currently the home to the division of NASC. The increase in interest in NASC has led to limited space in the building to accommodate the growing

departments and its students.

Some professors have suggested looking for teaching space in new or repurposed buildings planned for Colgate, including the Residential Commons and the new Center for Career Services.

Although the division has been growing, the budget has not increased in the past couple of years. Despite this, McHugh said that NASC is fortunate to have the budget they have now.

The division also has a new initiative sparked by last year’s peaceful sit-in at the Hurwitz Admission Center and the resulting “Colgate for All” document of requests for institutional changes at Colgate. One of the requests was to have a NASC advisor for underrepresented students. Starting this year, the department has formed a liaison group to fulfill that request.

“We, as faculty in the natural sciences, want to serve all of our students as best we can, but we do know that some underrepresented students face challenges,” McHugh said. “This liaison group was developed through a lot of conversations with students and faculty, thinking if there were some faculty within our division that students felt comfortable going to, knowing those faculty would be sensitive to the kinds of challenges they might face, or the kind of different life experiences they might have.”

McHugh said that the liaison group is not meant to take the place of formal academic advising but aims to provide mentorship or any kind of additional support students might need.

“What was wonderful was the faculty members that we’ve asked to join this liaison group were suggested by students,” McHugh said. “Every faculty member I contacted, without hesitation, said, ‘I want to do this, sign me up.’”

Faculty members new to Colgate or to a tenure position, made short presentations on their respective areas of research and teaching at the meeting. Some mentioned ideas for courses they hope to introduce at Colgate, ranging from a psychology course looking at the mechanisms of inequality and conflict, to a geology course comparing natural disasters in science to their representations in the media. Despite the challenges they seek to overcome, NASC is bringing about many innovations that will likely change the department for the better.