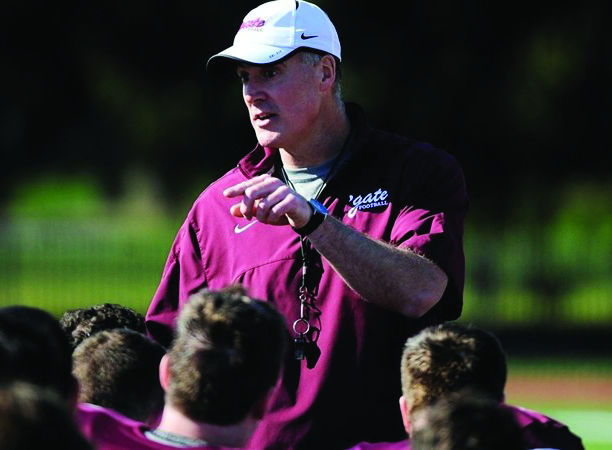 Head Coach Dan Hunt feels optimistic about the potential for this season with many returning veterans and a diverse class that will serve the team well for years to come.

To say that this year’s football team has reloaded with a strong recruiting class would be a big understatement. The 2015 first-year class, compromised of 24 players, hail from the states of Florida, Illinois, Massachusetts, New Jersey, Ohio, Pennsylvania and Texas.

“In terms of our needs going into this season, we haven’t necessarily needed a first-year to step up and fill a starting position. However, there have certainly been a lot of first-year that have been impressive and will be in the mix on the field – whether it be starting, subbing in or on special teams.” Thus far in preseason training camp, Coach Hunt has been very excited with the play of tight end Nick Martinson. Martinson is currently ranked as the second tight end on the team’s depth chart, but will likely be a starter on opening day as the team utilizes two tight ends for most of their offensive playbook.

“He’s as athletic of a kid as we’ve got. He can do it all – run, jump, catch and his height is also to his advantage. As soon as he masters the system, he’ll be a player who will get many reps for us,” Hunt said regarding Ives. First year lineman Jovaun Woolford and wide receiver Owen Buscaglia are also expected to make contributions to the offense.

On the defensive side of the ball, the first-year defensive backs will be hard to miss on the field. Hunt believes that the first year defensive backs are the “most dynamic” players of any other position. Tyler Castillo and Courtney Mimms are expected to see playing time on special teams, while Dillion Deluliis and Ben Hunt will add depth at the safety position, Chuck Moore to the defensive line and Josh Serra as a backup kicker.

The philosophy for finding recruits has continued to stay the same for the coaching staff – a heavy emphasis is put on finding athletic linemen, then a multi-purpose quarterback.

“We get kids who are told by other schools that they can play safety or receiver. In our offense, we need a dynamic player who can comfortably run and throw the ball from anywhere. Some schools only want a 6’4 pocket passer as their QB, while we generally have a 6’1 QB who is way more athletic and versatile,” Hunt said of the sought after criteria for a quarterback.

Not only do first-year team members possess unique skill sets on the football field, but some also have unusual talents off the field. Most notably, defensive lineman Caleb Fell – a big and physical force up the middle – is musically inclined and held a lead role in a musical play back in high school.

The first-year class on the team is made up of many intelligent and high-powered players. Some of these players will be tested right off the bat next Saturday in Annapolis, Maryland for the 2015 season opener at Navy. After facing Navy, the Raiders return to Andy Kerr Stadium to host University of New Hampshire.