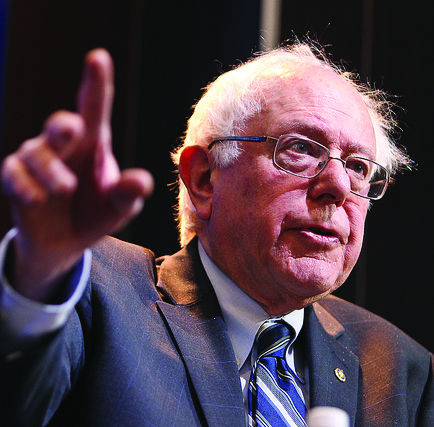 “Bernie Sanders for SPW.” For all the vitriol Yik Yak gets, there are some true gems of intelligence and wit hidden deep inside; that was one of them. I’m not so sure the 73 year-old Senator from Vermont would be the most entertaining Spring Party Weekend (SPW) act (not accounting for his Brooklyn accent), though I could be proven terribly wrong. It is wildly interesting to see that a relatively unknown politician from a neighboring state, and an avowed socialist, has permeated the Colgate Bubble. If anything, that speaks to the strength and support Sanders has obtained over the past few months.

That support in itself comes as somewhat of a surprise to the entrenched political forces (read: Hillary Clinton, et al.), but it shouldn’t. Sanders has tapped into the energy that catapulted a young Illinois Senator to the Democratic nomination in 2008. Progressives, especially white progressives, have long seen the Clintons as centrist sell-outs to the true progressive ideology. These are the same progressives who have been disappointed by President Obama’s somewhat centrist approach.

In Sanders, they see a candidate who has been dedicated to the progressive agenda his entire life and as a break from the old stagnant corporatist politics. Sanders’ support is emblematic of the vast divides between different coalitions of the Democratic Party.

In 1984, at the Democratic National Convention, Rev. Jesse Jackson gave a speech entitled “The Rainbow Coalition,” in which he asked for the downtrodden to join together and oppose the policies of Reaganomics. The groups invited were African Americans, Jewish Americans, White Progressives, Hispanic Americans, Asian Americans, Arab Americans, LGBTQ Americans and young voters. Sound familiar? It ought to, because this was the foundational support for Obama, with the addition of a few other key groups. Without Obama to rally these groups, it is questionable if any candidate can really hold together this winning coalition and get it excited enough to vote on Election Day.

The Rainbow Coalition is crumbling. As the various interests of these groups fail to align together and with one or more candidates, the nominees face tremendous pressure from primary voters to accept positions that are dangerous in the general election. This is the return of Occupy Wall Street. The group’s positions regarding income distribution have become the lingua franca of Democratic economic policies; yet, its anti-corporatist attitude is not without detractors within the party.

The different forces within the Democratic Party have long been pushing in opposite directions. To win the Democratic nomination and possibly the general, the candidate will have to come up with a balancing act that brings together the Rainbow Coalition once again while opening up to middle-class white voters in key states. This is no small task, and the candidate will have tremendous difficulty doing so, notwithstanding any potential legal issues (e.g. secret email servers). Then again, if a Democratic candidate cannot unite the coalition for something, he or she can always unite them against something—or should I say someone. Donald Trump is the perfect foil for any Democratic nominee.

Bernie Sanders is making the 2016 Democratic nomination interesting, to say the least. However, his support presents a long-forming rift in the party. As centrists and progressives shift in opposite directions, the Democrats will have to do what all political parties ought to do: reflect on their policies, positions and relations to the activist base. I hope Bernie Sanders and every other serious candidate running for president has something better to do next April during SPW.