In the Light: Katie Fallon 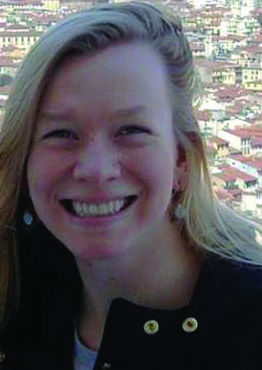 Senior year at Colgate might seem far away as an incoming first-year, but the future of thesis papers and job searches arrive before anyone expects it. Students often worry about building their resume and appealing to future employers. Some, like senior  Katie Fallon, will have no problem.

Senior political science and psychology concentrator Katie Fallon had the internship of a lifetime this summer. As an intern for CBS News, she had the opportunity to witness President Obama speak, partake in the “running of the interns” around the Supreme Court building and discover a new passion for media.

“I loved [interning for CBS News]. I had never done broadcast or journalism or any media before. Political science majors do cover a lot of politics, so that’s how I kind of slid in there.” Fallon said.

Participating in the “running of the interns” when the Obergefell v. Hodges  decision, which legalized same-sex marriage, was made in the Supreme Court was another highlight of Fallon’s summer. The Court does not release their decisions electronically, so it’s up to the interns to race to the press room to deliver the big news. But the best part of Fallon’s internship was going to the White House.

“I sat in at the Press Conference that President Obama did, after the Charleston shooting, which was unexpected and unplanned. I was 10 feet away from the president, which was really cool,” Fallon said. “It was very solemn and calm – an air of sadness was present. The Vice President looked sad. Gun control was one of his major issues that he advocated for.”

Fallon’s involvement in D.C. events is mirrored by her involvement on campus. As a Colgate student, she’s a member of Gamma Phi Beta sorority, plays rugby, is an active participant of the Network, which is a sexual assault awareness group, is on the volleyball team and has done Kuumba. She even took a break from her on-campus activities to study abroad in Florence last semester.

“I loved being abroad, but it made me miss Colgate and being with my friends. Having all the awesome activities that Colgate has – you don’t have those when you study abroad. You just wander around the city.” Fallon said.

Despite Fallon’s accomplishments, she still has goals for her last year on campus.

“I really want to get involved again and balance course work and searching for jobs. Basically, I want to enjoy my last year to the fullest.”