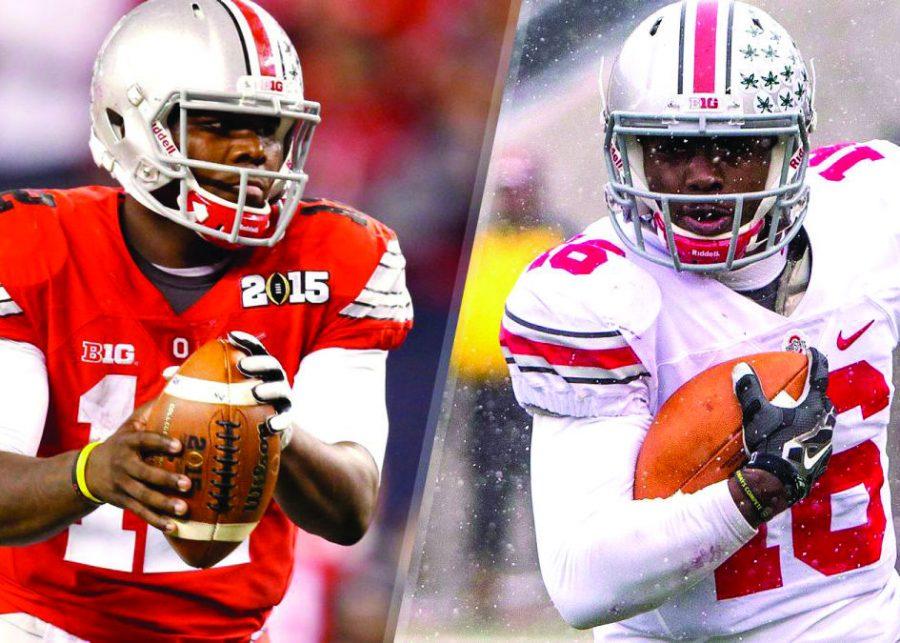 This week, the NCAA football season starts. Teams like the Texas Christian University Horned Frogs, Alabama Crimson Tide, Oregon Ducks and the Ohio State Buckeyes will fight throughout the season, vying for one of the four spots available in the College Football Playoff. The defending National Champions, the Ohio State Buckeyes, are ranked first in preseason, and are favored to be the best team in the nation for the second straight year.

With three potential Heisman Trophy candidates on his roster, it would seem that head coach Urban Meyer should be prepared for the pressure of defending a National Championship. Unfortunately, his three star players all play the same position.

Quarterbacks Braxton Miller, J.T. Barrett and Cardale Jones all played for the Buckeyes last season. Miller, who had been named the starter for the 2014-2015 season, went down with a season-ending shoulder injury during a preseason practice. Before his injury, he was considered to be a Heisman hopeful, contending with the likes of star quarterbacks such as Jameis Winston and Marcus Mariota.

J.T. Barrett, a redshirt freshman who had never played a game, was given control of the Buckeye offense. With immense pressure to perform, he played spectacularly, leading Ohio State to a 11-1 season, qualifying for the first ever College Football Playoff, and setting 19 Buckeyes and Big 10 records. Tragically, in the final game of the regular season, he was sidelined with an ankle injury that would suddenly give Cardale Jones, the third string quarterback, a chance to play in the Big 10 championship.

The Buckeyes won the game 59-0. Jones would eventually lead his team to a National Championship. He excelled in a convincing upset of number one Alabama in the first round of the playoffs, and defeated number two Oregon for the title.

Urban Meyer isn’t worried about defending his title right now. He’s worried about the toughest lineup decision in all of college football this year. Which quarterback should he play? His decision has been made easier by Braxton Miller’s transition from quarterback to halfback, leaving just J.T. Barrett and Cardale Jones in competition for the starting lineup. They both had convincing performances last season and both contributed to the Buckeyes National Championship win. Barrett led the team through a stellar regular season and Jones proved his ability to perform under high pressure situations by winning both the Big 10 Championship and the National Championship.

A wrong decision could spell an end for Ohio State’s title hopes. Ranked number one going into the season, Meyer faces immense pressure to choose the right starting quarterback. Any shortcoming will be considered a failure and a reflection that the wrong starter was chosen. With little time before the season starts, the race is tight with no indication on who will win the starting role. Jones has the hardware backing him, but Barrett is a natural leader as seen in his selection as one of the six Buckeye team captains.

Having two star quarterbacks may seem like a blessing. However, for Meyer, it may turn into a caustic situation, as neither player can be clearly presented as a starter. He must make the right choice, while no decision seems wrong.