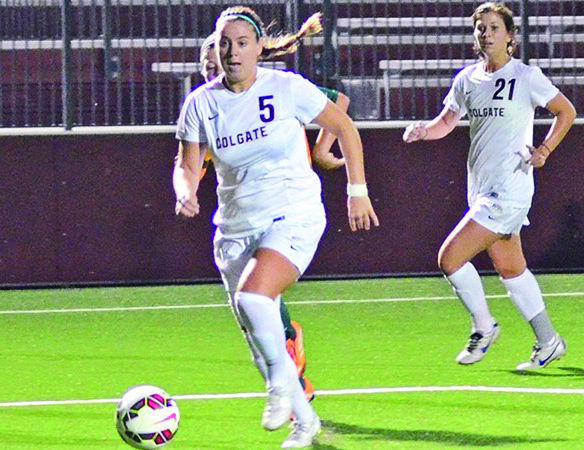 Senior forward Jenna Raepple leads the offense down the field in a tournament at Syracuse University last weekend.

The women’s soccer team has something to prove this season, and they have made some crucial adjustments to achieve the success that they were so close to last year. After a successful 2014 season with only one Patriot League loss in the regular season, the team fell to Boston University in the NCAA Patriot League final and was not granted an “at-large” bid into the NCAA tournament. However, this year brings another chance for this group of talented women to clinch the title. They are off to a strong start with a 2-0 victory over Albany.

This season welcomes 12 new first-year students and two new assistant coaches. Junior midfielder Lysette Roman described the group of new players as “talented and genuine” girls who meshed with the team immediately, both on and off the field. Only losing two starting players from the previous year and gaining so many new players allows the team to make more substitutions but keep the same level of play, which will be an advantage many of their

competitors will not have.

New assistant coaches Brett Sarsfield and Alyssa Manoogian join the coaching staff under head coach Kathy Brawn. Sarsfield, who has experience coaching on various levels, brings with him a new perspective to help change the game plan this year. Manoogian is a Colgate soccer alum who comes with a great understanding of the program and who, according to sophomore forward Sarah Coy, “brings great energy to the team.” Both coaches offer an abundance of knowledge and skill the team will benefit from.

One of the biggest changes for the Raiders this year is their defensive strategy.  Traditionally, this team has played a very “high-risk, high-reward” style, with an emphasis on pushing forward and keeping the spacing wide.  However, this season the style has shifted to become more conservative and more secure with a solid, compact defense. Sophomore defender Emily Pullen thinks adjusting to the new style could be challenging, but she has no doubt that the team will adjust and execute.

On September 4 they take the field again, going head-to-head against South Carolina in Columbia.