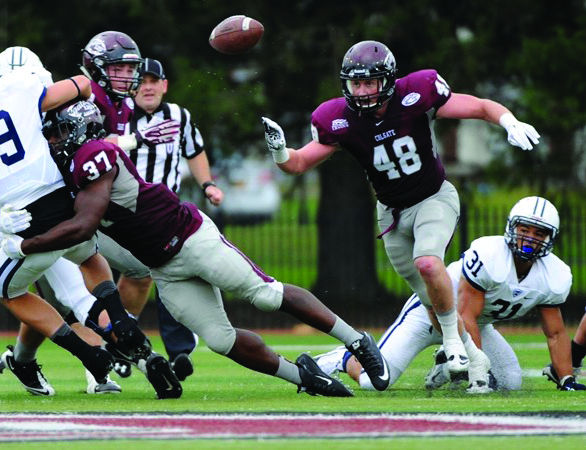 The Colgate Raiders suffered a heartbreaking 29-28 loss to the Yale Bulldogs at this year’s homecoming game. Andy Kerr Stadium was filled with 7,343 spectators, passing the 7,000 mark for the second year in a row. The Raiders, sporting a special 125th Anniversary Season logo on their helmets, held a 21-7 lead at the half from three straight touchdowns, including a fumble recovery for a 35-yard return. Despite Colgate’s strong first half, they were not able to stop Yale’s offense, which scored three touchdowns in the second half.

The Bulldogs opened up the game with a 14-play drive that resulted in the first touchdown of the contest. Shortly after, the Raiders took control for the next three quarters, beginning with a 2-yard rush for a touchdown by junior tailback John Wilkins. This game marked a personal best for Wilkins, going 94 yards on 24 carries, both a game and career-high. In fact, all three of

Colgate’s ball carriers scored in the contest, including sophomore tailback James Holland who averaged 3.6 yards per carry and totalled 29 yards.

In the second quarter, junior quarterback Jake Melville gave the Raiders the go-ahead score with a 20-yard rushing touchdown. Despite the loss, Melville had a strong game. The junior from New Jersey carried the ball 12 times for 59 yards and was 11 for 21 throwing for 140 yards.

Before the half Colgate tallied an additional touchdown. Senior linebacker Cameron Buttermore recovered a fumble and ran 55 yards for the first touchdown of his career. Buttermore wasn’t the only standout on the Raiders’ defense. Junior linebacker Kyle Diener led the team in tackles for the second week in a row with 13, followed by Buttermore’s career-high of 11 and junior defensive backs Chris Morgan and Chris Hardegree with 10. These defensive players kept the Raiders in the game against the Bulldogs.

Yale struck first in the third quarter with a touchdown by Bulldogs’ receiver Michael Siragusa Jr. to make the score 21-14. Colgate regained their two-touchdown cushion with a 12-yard rush by Holland at the beginning of the fourth, marking the sophomore’s first rushing touchdown of the season.

This was the last time that Colgate would score as Yale put together a pair of 7-play drives, accompanied by a Colgate three and out.  Despite Colgate’s hard-fought offensive series in the first half, it did not appear that luck was on their side for the second, as Yale’s Foyesade Oluokun blocked two attempted field goals.

The Raiders made a final push when junior John Maddaluna III returned the last kick-off of the game for 46 yards close to midfield. A long rush by Colgate well into Bulldogs territory but was called back due to a penalty, one of the

Despite the tough loss, Head Coach Dan Hunt still recognizes the positives from the game.

“At times we played OK, but that’s a game we’ve got to learn how to win. That’s a good football team and we played a little better on offense today,” said Hunt.

The Raiders will continue on with the season next week at Holy Cross in Worcester, Massachusetts, and Hunt and the team are already

preparing to bounce back from their difficult loss.

“I wish we were playing right now. All we can be is 1-0 next week and that’s going to be our goal. We’re going to put this game behind us and get going in league play,” Hunt said of the team’s focus after the loss.