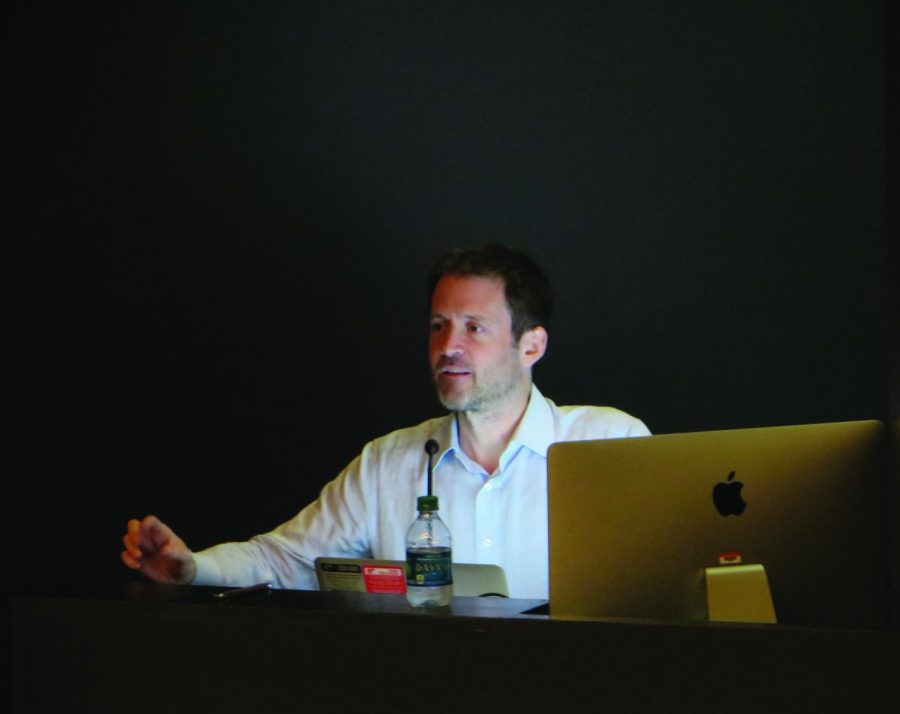 On September 9, three incredible artists who work together in  an initiative they have coined, Machine Project, gave a talk about what art is to them and how it can be influential.

Machine Project can’t really be described as one thing because it encompasses a multitude of different concepts. It is a non­profit organization that originates in Echo Park, Los Angeles as a storefront that hosts events about anything and everything that human beings find interesting. This includes scientific shows, poetry, musical performances and food tastings. Machine Project considers itself an informal, educational institution that is run by a group of artists and performers who collaborate together to host events. Machine Project came to Colgate to discuss its most recent project “Perfect Strangers: Machine Project and the Hamiltonians,” where it will be holding workshops all over town and campus. To kick off the event, Mark Allen and art duo “Krystal Krunch” visited Colgate to explain what it is they do and how they do it.

Allen began the presentation by explaining what art is and how it is incorporated into everyday life. Allen is an artist, educator, curator and the founder of Machine Project. Along with running Machine Project, Allen is an Associate Professor of Art at Pomona College. In his talk he clarified the misconception that art is perfect.

“Art is a small word that has to do so much work, because it is something that is found in so many different forms.” Allen said.

Art is not a black and white concept, and it is not a success versus failure experience, but just simply an experience in itself. He described what kind of work Machine Project does and how they are incorporating it into the village of Hamilton.

The art duo “Krystal Krunch” followed Allen. Krystal Krunch is comprised of Asher Hartman and Haruko Tanaka, two artists who met in graduate school. The aim of their initiative is to view and respond to human energy in the body, the psyche, architectural spaces and artworks. They aim to help people discover their true selves, which can unlock their highest potential. By doing so, Krystal Krunch hopes that people will approach their lives with compassion, love and wonder. Their workshops and presentations are very holistic, in that they focus on all parts of the human art experience. During their portion of the talk, they shared photos and stories from their workshops. They even had the audience participate in a very abbreviated version of their typical psychic workshop. In this exercise, the audience was told to partner up, and gaze into each other’s eyes.

The first step was to describe the eye’s physical attributes. Following this step, partners were told to voice any feelings that came up. It sounded simple, but after participating in it myself, I can say that it is much easier said than done. My partner was Assistant Art & Art History Professor Lakshmi Luthra. After struggling to describe her eyes as well as my feelings about them, she explained to me that it is difficult to do with any type of art, and is something that she sees in the classroom with her own students.

“It is hard to go beyond a description that is unquestionable.” Lutheria said.

It was then explained that these psychic exercises can influence people’s artwork.

“It helps people go back to who they are as an artist. It helps them get to the core of what they’re actually after instead of what they think they’re after.” Hartman said.

Both Mark Allen and Krystal Krunch presented art in a way that made me feel as if anyone could create art. They explained that it is essentially an extension of who you are as a person, and that the hardest part of the entire process is coming in touch with that person.