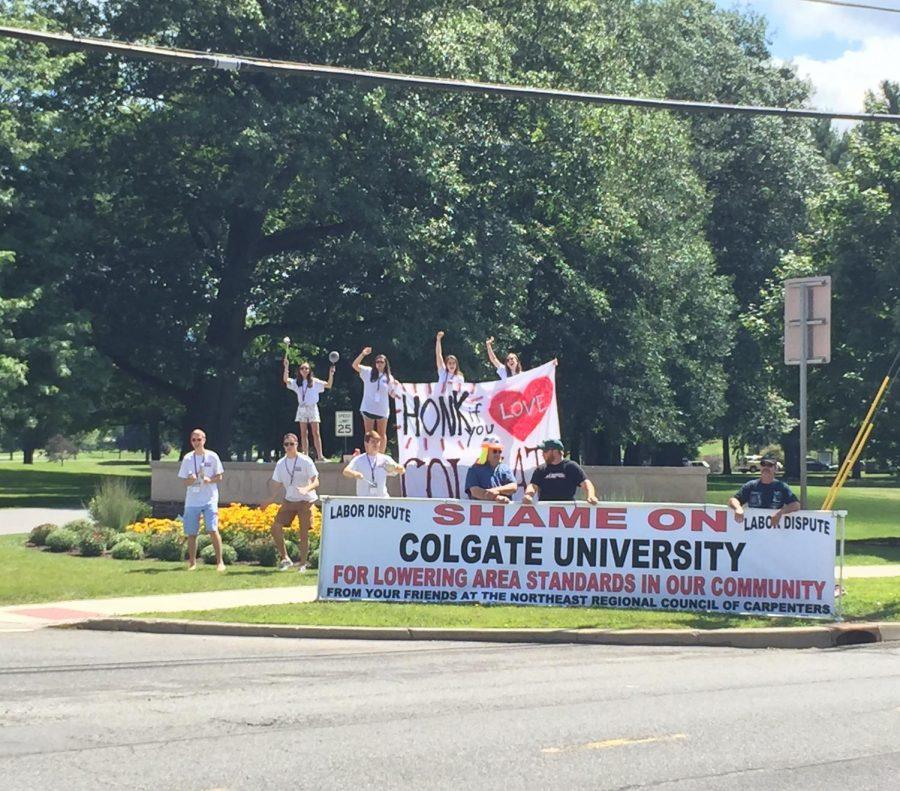 Members of the NRCC protest alongside members of Colgate’s Link Staff on Oak Drive.

On First Year Arrival Day, August 23, the incoming Class of 2019 was not only welcomed by cheering orientation leaders (known as Links) and the recurrent “Honk if you love Colgate” banner, but also by a group of protesters holding a different sign. Standing in front of the Colgate University sign on Broad Street and East Kendrick Ave, protesters from the Northeast Regional Council of Carpenters (NRCC) stood quietly while holding a poster reading “Shame on Colgate University for lowering area standards in our community.”

Colgate issued a comment on August 20 when Associate Vice President for Facilities and Capital Projects Annie Angueira sent an email to members of the Colgate community. Angueira wrote that the NRCC’s banner inaccurately suggests that Colgate is responsible for wage rates paid by a subcontractor.

“As is typical in construction, as the project owner, the university does not control the subcontractors hired by the general contractor. The subcontractor in question has also not started work on campus,”Angueira said in the email.

Angueira further stated in the email that the protest has not taken place on university property and has been confined to public spaces.

“However, we ask you to exercise caution as you drive through these areas,” Angueira said.

Josh Goldstein, a senior and member of Link Staff, was one of the Links cheering and welcoming the first-years by standing on the Colgate sign next to the NRCC demonstrators.

“I was there with them, but we didn’t really interact much. They were really friendly. I felt pretty awkward because they were protesting about unfair wages and I didn’t really know anything about the issue…But if their wages aren’t fair they should protest, and while it was a bummer, move-in day is probably the best day for them to get their message out there,” Goldstein said.

Senior and Link Staff member Turner Rapp thought the presence of the protesters didn’t seem to have too much of an impact on the day.

“[The protesters] were respectful and quiet and spirits seemed as high as ever judging by the honks of people driving past us,” Rapp said.

“All I really saw was a sign saying ‘Shame on Colgate.’ I was a little confused as to why people would be protesting something on move-in day for the incoming Class of 2019. I also thought that whoever it was could have staged it better, especially considering that the day was supposed to be devoted to acclimating the first years to their dorms and the overall Colgate campus,” Ionescu said.

Another first-year, Coby Gesten, remarked that the protesters didn’t bother him while driving up to campus.

“It was unfortunate that they felt they had to rain on our parade. Also, if they were subcontracted like I heard, their issue isn’t with Colgate; it’s with the subcontractor. That just makes it that much less necessary for them to try to interrupt a festive occasion,” Gesten said.

Senior Samantha Hom said she had mixed emotions driving by the demonstrators.

“The first time I saw the protesters was on first-year move-in day when they were standing at the beginning of Oak Drive.  I immediately found myself sympathizing with the Colgate Links who were holding the sign before I even knew what the protesters were there for. I think I was remembering how nervous I was as a freshman, and as a senior I am very nostalgic about my experience here. I realized shortly after that it wasn’t fair to blindly defend Colgate without understanding the facts behind the protest. My affection for my school and the community of people that have made my time here so special interfered with seeing both sides of the situation,” Hom said.

The protesters, whose presence by the sign has decreased since move-in day, were unable to be reached for comment by Maroon-News reporters. However, in an interview from August 10 by WKTV News, NRCC officials commented on their stance.

“[Colgate is contributing] to the erosion of the standard of living for carpenters,” NRCC officials said.