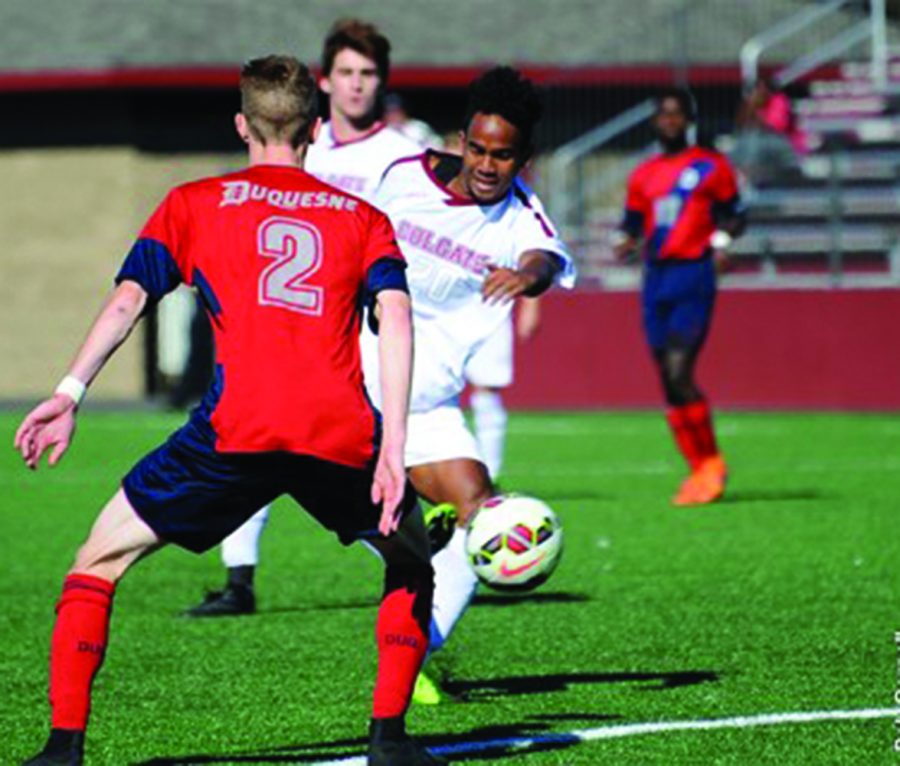 Sophomore midfielder Troy Moo Penn rifles a shot off in theoffensive zone as the Raiders attempt to score in the Duquesne tilt.

The men’s soccer team hosted the Colgate University Inaria Classic this past weekend at Beyer-Small 76’ Field.

After a major victory against Dartmouth, the Raiders battled against Air Force on September 18. The team won in dramatic fashion as senior forward Nick Rizzo scored the go-ahead goal that led the Raiders to victory. Three minutes into the match, sophomore midfielder Troy Moo Pen buried the first goal of the contest in the bottom left corner off a pass from fellow sophomore midfielder Jared Stroud. After a series of headers off a corner kick from lethal junior forward Ethan Kutler, junior defenseman Zach Tamen finished the play, rifling one past the keeper to extend the Raiders’ lead.

The Raiders went into the second half of the matchup 2-0, but Air Force was relentless in their efforts to get on the board. The Falcons tallied two goals in the middle of the second half. Junior goalie Ricky Brown kept Colgate in the game with several key saves as the Raiders desperately fought to get the lead once more. As the final minutes counted down, Rizzo scored his first goal of the season and secured the Raiders’ victory. Head coach Erik Ronning was very pleased with his team’s effort and offensive scoring capability.

“We came out with a tremendous amount of energy and a good game play. We were able to put a couple away and it was a great start by the guys,” Ronning said.

The Raiders took a three game winning streak into their matchup against Duquesne on Sunday. The first half of this match was one riddled with offensive opportunities for the Raiders, as Kutler and Moo Penn rifled several shots at Duquesne’s senior keeper Sam Frymier. Unfortunately, the Raiders could not bury one in the first half, although they did seem to dominate offensively. Brown played a very good game for the Raiders in goal, making several key stops. Luck was not on the Raiders’ side, however, as Duquesne was able to bury a goal in the middle of the second half. Although he is disappointed in the Raiders’ loss, Ronning is taking this loss as a lesson learned and remains focused on the home game this coming Saturday

“We will brush it off, move forward, and stay positive. We’ve got a great group of kids, a good team and we will get ourselves ready for American on Saturday,” Ronning said.

The Raiders, now 3-2-1 overall on the season, will face their first Patriot League opponent this Saturday. If the Raiders can shake off this past loss and play the type of game they have demonstrated they can play in their games against Dartmouth and Air Force, I am confident in their ability to dominate the Patriot League. The Raiders have suffered in the past during this time in the season, and it will be interesting to see if they can capitalize on their momentum. Colgate hosts American this Saturday at 4 p.m. on Beyer-Small ’76 Field.