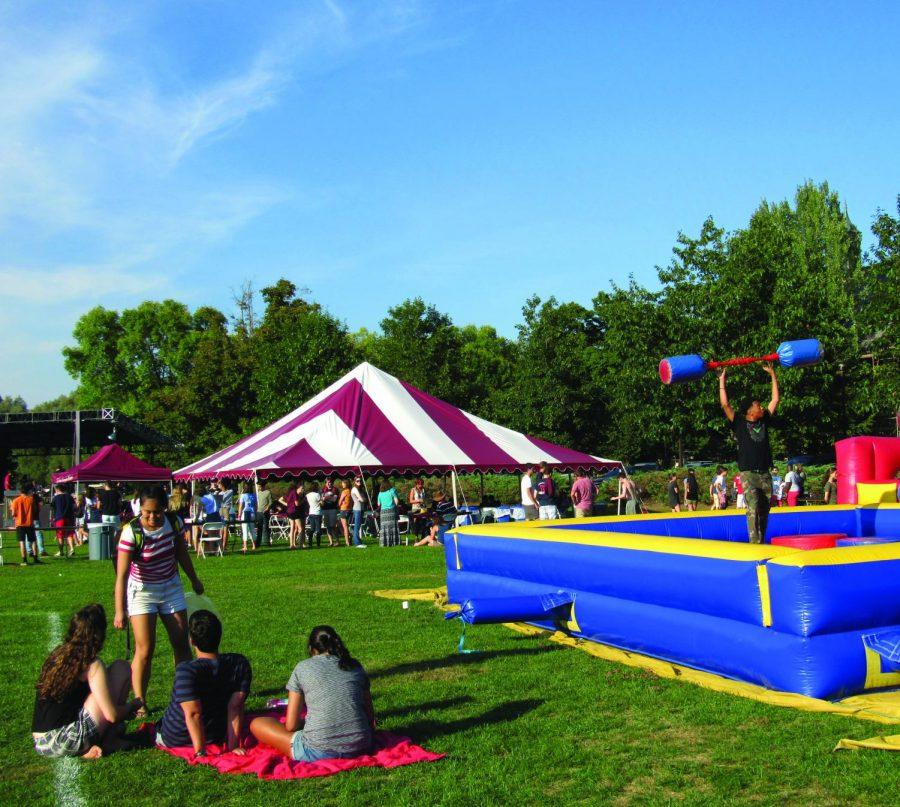 A mix of games, music and fun made this a memorable event on Whitnall Field.

Colgate students, faculty, alumni and Hamilton residents gathered together on Friday, September 18 from 3:30 p.m. to 7 p.m. for an annual celebration of music and art. ‘Gatestock, a music festival alluding to the glorious Woodstock concert days of 1969, filled Whitnall Field with the sounds of student musicians and the smell of popcorn and food vendors, along with the excitement of inflatables and student activities tables.

In recent years, Broad Street Records, founded in 2009, has played an enormous role in organizing musical venues across campus and throughout the village of Hamilton in order to support and expand opportunities for student groups and musicians at Colgate.

This year’s ‘Gatestock began with a rather slow start. Yet, the initial lack in attendance was nullified by the immense devotion students had to planning and making ‘Gatestock a success. Senior Karl Uy represented the Masque and Triangle Student Theater group on campus at its information table at ‘Gatestock, which displayed artistic, theatrical costumes.

“Students can try on a variety of costumes and have their photo taken and sent to them for a creative memory,” Uy said.

The Global Health Initiative was another organization present at the event, as they aimed to expand their Refugee Health Awareness Campaign to improve health conditions in countries such as Syria, where nearly nine million refugees suffered the

Neither the student organizations nor the music variety represented at

“I remember student bands around town, even some professors’ bands. There was a tie-dye t-shirt station, too,” Uy said.

Bands of diverse genres skillfully covered contemporary songs, including an energetic cover of Walk the Moon’s alternative-rock hit “Shut Up and Dance.” Later on, the crowd was treated to acoustic covers of Taylor Swift’s “Blank Space,” Pink Floyd’s “Mother” and Leonard Cohen’s “Hallelujah.”

Without a doubt, ‘Gatestock was a wonderful way to exude Colgate pride and a passion for student music on campus. It was extremely rewarding for Colgate students to experience such a fun event while still getting accustomed to the new year.Colgate students are fortunate to have such a unique opportunity as ‘Gatestock to immerse themselves in the music scene on and off campus.