Men’s Football Falls in the Rain to New Hampshire 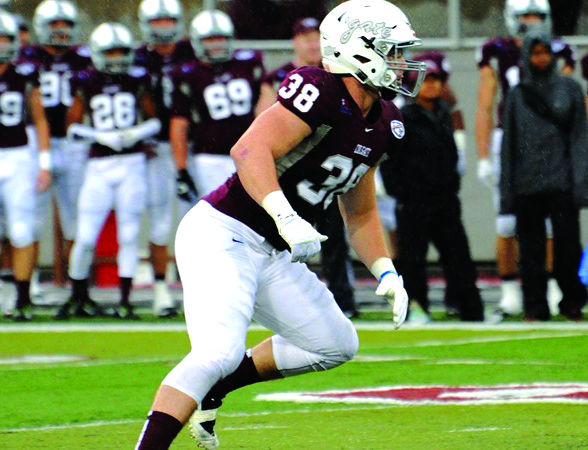 The football team suffered a tough defeat at the hands of the University of New Hampshire Wildcats 26-8 this past Saturday. The Raiders were held scoreless in the first half as they fell behind 20-0 at halftime. The Raiders were able to make a late fourth quarter charge, but it was too little too late, as the early deficit turned out to be insurmountable.

Wildcats running back Trevon Bryant ran for 70 yards on 10 carries while adding a touchdown on a 1-yard run to give the Wildcats a 7-0 lead. Earlier in the drive, Colgate senior defensive lineman Victor Steffen appeared to injure his left knee as he was hit going for a tackle. This major loss was the second in as many weeks for Colgate as the Raiders lost senior defensive back Adam Bridgeforth for the remainder of the season last week against Navy. Both injuries are crippling for a defense that was set to be one of the best in the Patriot League this season.

Colgate dug themselves into a hole as they entered the fourth quarter with a 23-0 deficit but were able gain some momentum when junior quarterback Jake Melville completed a 13-yard touchdown pass to sophomore wide receiver Alex Greenawalt early in the quarter. A Raider two point conversion brought Colgate to within two scores. On the Wildcats’ next drive, junior safety Christian Hardegree was able to record his first career interception that gave the Raiders great field position at the UNH 22-yard line. However the Raiders’ drive sputtered when Melville was sacked on fourth-and-8. New Hampshire’s kicker Christian Breda kicked his second field goal of the game just two drives later with just over two minutes remaining to cap off the scoring on the night.

Junior linebacker Kyle Diener posted a career high 14 tackles. Colgate Head Coach Dan Hunt had high praise for the Raiders defensive leader when asked what his thoughts were on his big performance this weekend.

“That’s Kyle. He plays hard every snap. But more importantly about Kyle is he practices hard. He’s a kid who shows up every day to practice and wants to get better. I knew we’d be able to rely on him to make the plays and kind of pick the defense up now that two of the seniors are out. He’ll be a guy we lean on and he’s the right guy for that job,” Coach Hunt said.

More magnified will his role be with the loss of Steffen. Hardegree, sophomore defensive back Keyon Washington and sophomore linebacker Pat Afriyie also added eight tackles for the Raiders defense.

On the offensive side of the ball, Melville completed 21 passes for 195 yards and a TD on a career high 41 attempts while also adding 59 yards on 17 carries on the ground. Senior tight end John Quazza had seven receptions for 56 yards and John Maddaluna III had six catches for 67 yards. Despite the loss, the Raiders gained 336 yards of total offense but surrendered 411 yards to the New Hampshire offense.

The Raiders’ schedule will not get any easier as the Yale Bulldogs come to Hamilton on Saturday for Homecoming Weekend. The Bulldogs will be playing their first game of the season as the Ivy League schedule annually starts later than the rest of the FCS schools. When asked about the challenge of getting their first win against a tough Yale team, Hunt emphasized the importance of remaining focused on what they could control in order to record the team’s first victory.

“It’s always interesting when it’s their first game. Obviously, it’s an advantage to us having played two. But you have no film on them to get ready for. But moving forward it’s still about us. We have to get better. We’ve got to find a way to get the ball in the end zone and stop making mistakes that are killing us. That’s on me, and that will be our emphasis this week,” Coach