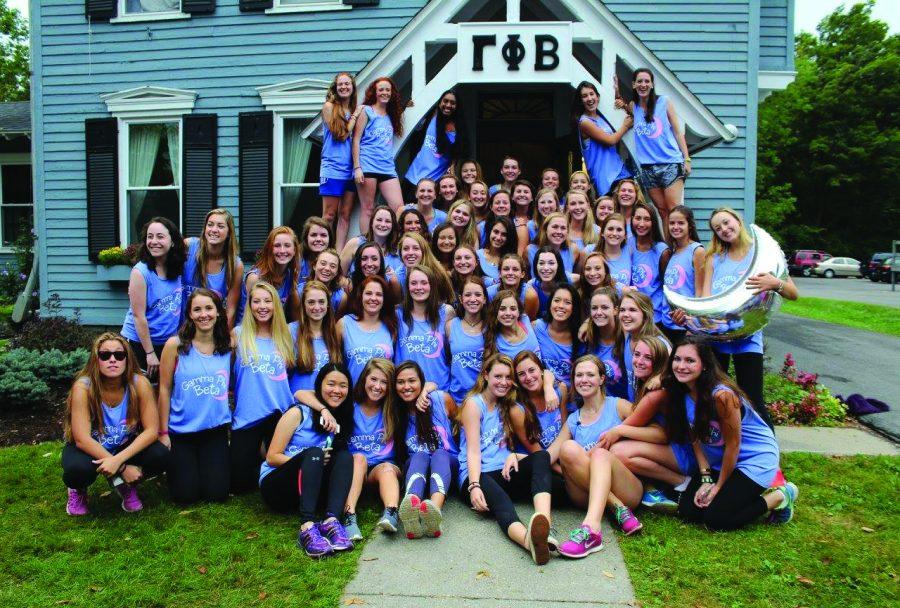 This past week many Colgate students took part in the sorority and fraternity recruitment process. Recruitment for both women and men occurred at the same time this year, leading to a week filled with potential new members (PNMs) getting to know the various Greek organizations at Colgate.

For sorority recruitment, three different Greek organizations hosted gatherings at their respective houses so that female students in the recruitment process would be able to meet affiliated members of each organization. The three sororities participating in recruitment this year were Delta Delta Delta, Gamma Phi Beta and Kappa Kappa Gamma.

“As the VPRs we have been planning this week of recruitment since the spring. We oversee communication and coordination between the three houses on campus, the potential new members and the team of unaffiliated recruitment counselors,” Hinton said, referring to the tasks that she and Zissu were responsible for during the recruitment process.

“Each day of recruitment has a theme for all of the houses. The first day is ‘Go Greek,’ when we all talk to PNMs about Greek life on campus. The next night is ‘Sisterhood Night,’ where each house highlights aspects of their sisterhood that they value. The third night is ‘Philanthropy Night,’ where each house talks about the philanthropic organizations that they are associated with and their events; for example, we support St. Jude Children’s Research Hospital, so we showed a video from St. Jude that talks about what Tri Delta has done over our years of partnership. The last night is ‘Preference Night,’ which is usually the most formal night where we talk about our own experiences in our chapters,” President of Delta Delta Delta Laura West said.

“The events of each night embody different aspects of sorority life, but essentially it is about the members getting to know the potential new members and vice versa. The parties last different lengths each night from 20 minutes to an hour,” Hinton said.

Each PNM going through the sorority recruitment process is grouped with several other PNMs and randomly matched with a Recruitment Counselor (RC). The RCs are meant to act as mentors during the recruitment process, forming a support system for the PNMs. Several RCs talked about their role in helping the potential new members through what is often an anxiety-ridden time.

“I tried to alleviate stress by being there to answer their questions and provide timely information. I was also there to listen when they felt conflicted or unsure. I think the Panhellenic recruitment team did a great job of providing training and structure for the RCs so that the PNMs get the consistency and support they need,” junior RC Olivia Acker said.

“As an RC, I was given a group of nine girls that I helped get from sorority to sorority during the week. But the RCs were also mentors and an unbiased and disaffiliated resource for the PNMs during the week. The PNMs could talk to us honestly about their experiences during the process…While we [the RCs] were waiting for the PNMs to come back from parties, we would all talk to each other about how nervous we were for them and how we were excited to hear how that night went,” senior RC Lindsay Kahlbaugh said.

“I feel so lucky to have had the opportunity to meet some fantastic girls, and I hope to keep in touch with them,” senior RC Samantha Sloane said.

Sophomore Edie Connor was one of the students to participate in recruitment week, citing her experiences within her assigned group and in the process in general as positive.

“I really enjoyed meeting people throughout the process – I instantly felt a connection with the eight other women who were in my recruitment group (just as nervous as I was) and I had great conversations with fabulous women at all three sororities. Even within just the few short nights, I really got a sense of the passion and enthusiasm every sorority member has for their house and how much every member genuinely loves and cares about each and every one of their sisters, which was truly very special,” Connor said.

For the fraternities, recruitment week typically consists of several nights of meeting those interested in joining a Greek organization, ending with a formal dinner the night before bids are given out. This formal dinner, called the “Smokescreen Dinner,” is for PNMs who are invited back for the night. The following day, bids are given to PNMs who are accepted into each organization. The five organizations participating in the recruitment process this year were Phi Delta Theta, Phi Kappa Tau, Beta Theta Pi, Delta Upsilon and Theta Chi.

“This year for recruitment we tried to make our events more comfortable for the potential new members. We understand that it can be a stressful time for the individuals rushing, so we wanted to make them feel more comfortable and give them the best opportunity to be themselves. We also approached recruitment week with a desire to diversify Delta Upsilon and gain new members from multiple backgrounds,” President of Delta Upsilon senior Brandt Gribbin said.

Some of the houses have their own traditions associated with

recruitment week. Phi Delta Theta is one such fraternity with an annual tradition, which involves smashing an old car with the PNMs.

“On Tuesday we hosted our annual ‘Bash the Buick’ event, where we buy a junked car, some spray paint and a few sledgehammers and relieve some of the stress of rush week. Beating up a car is a great conversation starter as it turns out,” President of Phi Delta Fraternity and former Recruitment Chair senior Sean Maguire said.

While recruitment is a way of meeting new people, several of the students in the fraternities acknowledged how there is limited time to sufficiently get to know new people and how this can be problematic.

“Recruitment lasts for less than a week. In the end there’s only around six hours of interaction allotted for fraternities to then decide on who to give bids to. In my mind that’s pretty ridiculous,” President of Theta Chi Niall Henderson said. As president, Henderson was in charge of helping out the Recruitment Chairs and giving a speech at the beginning of the recruitment process.

Maguire and Gribbin seemed to share in this sentiment, noting that it can be difficult to get to know the potential new members in such a short span of time.

“I always thought a longer process would help out with finding the right new class of brothers. I imagine a longer recruitment period would be a little more stressful, but the decisions which are being made on both ends of the bid are important,” Maguire said.

“The only thing I would change from this year to next is to find a more efficient way to get to know each of the potential new members. It seemed as if a lot of guys were simply [too] shy to get to know a lot of the current

brothers in such a short time span,” Gribbin said.

Henderson acknowledged the difficulty that can come in deciding on which PNMs to accept into each new class and which to turn away.

“My favorite part of the process is when it’s finished. Rush week is a hard time on both sides of the game and every year there are lots of good people who don’t get a spot. It never feels good to have to turn people down. I think it’s also important to note that there are lots of different ways to have fun and make strong connections with people at Colgate. I know that the recency of getting turned down will really suck for some people, but I would encourage those who didn’t make it to try and think about all the other great groups that exist here at school,” Henderson said.

Despite this, the general consensus about recruitment week from those involved in planning and running the process was positive.

“My favorite part of recruitment is getting to know a lot of different people from all over the country, and even the world. It is always interesting to hear about people’s diverse backgrounds and why they are interested in joining our fraternity,” Gribbin said.

“Getting to see our members so passionately explain how much St. Jude means to us or how they have made friends by joining Delta is really awesome. Moreover, it’s just fun to spend five hours a night together for a week; if you weren’t that close at the start of recruitment you usually are by the end,” West said.

Some of the girls involved in the sorority recruitment process spoke to potential changes that could be made for the future of Greek life at Colgate. Panhellenic Council President senior Natalie Carpenter is trying to set up a better scholarship fund so that more girls can become involved in the recruitment process without having to be concerned with the financial burden that can come with being a part of a Greek organization.

“I hope that there is a hefty scholarship fund. I have been working really hard with the development office to get a scholarship fund started for women who are nervous to accept a bid because of financial anxieties. I think this can make Greek life much more inclusive,” Carpenter said.

Zissu acknowledged the importance of diversity within Colgate’s Greek system for the future.

“I hope that we can work to increase diversity in Greek Life and I think partnering with other organizations to host events would be a great way to work towards this. Greek life is full of women involved in all types of organizations on campus and we’d like to promote even more cooperation across Greek and non-Greek organizations,” Zissu said.

“I like when I can talk about my positive experiences in Greek life. It is amazing to see the opinions of women change as they meet women in the houses and hear about the different types of people in the community. You can see when someone’s conversation challenges the stereotypes and makes them more open to different houses,” Hinton said.

“I think that standing on this side of recruitment really shows how much the Greek women on campus care about one another. Everyone really wants all the girls to have the most positive experience possible and we are lucky enough to actively work toward making that a reality. As seniors, it is very special to be able to come full circle from our time as potential new members and know that the women are about to embark on a really extraordinary three years,” Carpenter said.