In the Light: Sean Maguire 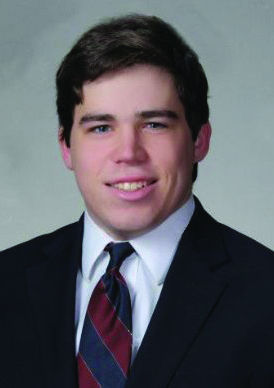 For many, the passing of Labor Day signifies the beginning of a busy period. The end of add/drop, the activities fair and Fall Recruitment all mark the transition from a summer of leisure to a school year filled with activities. For senior Sean Maguire, this time of year is just as busy as ever. As the president of the Phi Delta Theta fraternity and  leader of Colgate’s only all-male a cappella group, the Colgate Thirteen, Maguire has a packed schedule. Maguire is a Computer Science concentrator but is unsure of his plans for after graduation.

“I want to go right into the real world. I’m applying for jobs right now, as is everyone else,” Maguire said. “Over the summer I worked at Advance Realty in New Jersey. It was really cool… I got to learn a whole different side of running businesses that I feel like a lot of people don’t get to see that much of.”

Throughout his time at Colgate, Maguire has been involved in various clubs and activities. During his first year, Maguire joined the club rugby team. It was through rugby that Maguire was introduced to the most rewarding experience he has been a part of: The Colgate Thirteen.

“I never sang before college at all; the first time I sang was at the Thirteen auditions, and now I’m the leader. I’ve been to over 30 states, sang in two baseball stadiums, one basketball stadium and Radio City Music Hall,” Maguire said.

Unlike singing, Maguire approached Colgate knowing that he wanted to join Greek life. Similar to his involvement in the Thirteen, he quickly took on a leadership role.

“I came to Colgate knowing I wanted to go Greek, and eventually found my way to Phi Delt. Being president of the chapter takes up a lot of my time, but I love doing it and spending time with my brothers,” Maguire said.

If a theme can be taken away from Maguire’s involvement on campus, it would be brotherhood. The Colgate Thirteen, Phi Delta Theta and even rugby team are all-men associations.

Despite all of his involvement on campus, Maguire still has plans for what he wants to accomplish during his last year.

“I have always wanted to do a radio show. I need to find time to do it next semester,” Maguire said.

Throughout his time at school, Maguire has acquired a lot of experience with balancing academics and extracurricular activities. His advice for incoming students is simple.

“Don’t forget about school, and the professors are your friends,” Maguire said.