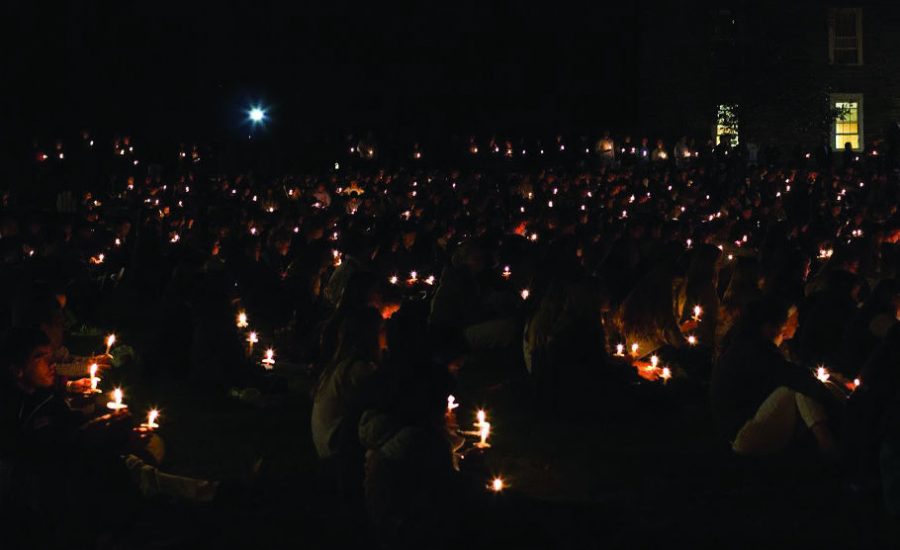 More than 2,000 members of the Colgate community congregated on the Academic Quad to commemorate the lives of Depuy and Adams.

First-year students Ryan Adams and Cathryn (Carey) Depuy died in a plane crash in Eaton, N.Y. after taking off from Hamilton Municipal Airport on September 20. The two students, both 18 years old and from Ridgefield, Conn., were the only people aboard the aircraft.

All members of the Colgate community were invited to attend a candlelight vigil Monday, September 21, at 7:30 p.m. on the Academic Quad to commemorate the lives of Adams and Depuy, who were expected to graduate in 2019. Additionally, many planned campus events this week were canceled.

A majority of the student body attended the vigil, bringing blankets, sitting silently on the Quad huddled together with friends and listening to speakers deliver addresses from the steps of the Colgate Memorial Chapel. Before the ceremony began, members of the staff, faculty and Student Government Association (SGA) distributed candles to attendees, who kept them aflame throughout the vigil. The chapel bell chimed 13 times to start the ceremony.

Senior Sara Hinton, who attended the vigil, was struck by the beauty of the event.

“As everyone was gathering on the quad, the sky was turning from pink to black, and as the piano played, two geese flew right overhead. The image struck a chord with the crowd and we were all feeling the same thing in that moment,” Hinton said.

All of the speakers cited the vast academic and athletic accomplishments of Adams and Depuy, as well as their enthusiasm, positive dispositions and already immeasurable contributions to the Colgate community. Depuy was captain of the lacrosse and cross-country teams at Ridgefield High School and had joined the women’s track and field team at Colgate. Adams became one of the youngest Eagle Scouts in the nation at age 13, played ice hockey, golf and squash through high school and had joined the club squash team at Colgate.

The speakers affirmed that although Adams and Depuy were only on campus for four weeks, they will forever remain members of the Colgate community. Harsin acknowledged that even Colgate students and faculty who did not personally know Adams or Depuy feel those losses deeply.

“Our lives are intertwined. Some of those threads have been broken. The shape of our community will be different without those connections,” Harsin said.

Accordingly, the Colgate community can act as a powerful support system during times of tragedy. Speakers encouraged students to be kind to one another and understand that everyone grieves in different ways. As a representative of the Class of 2019, Vitale stressed the importance of reaching out to those who are affected by the losses.

“I offer my hand and heavy heart to every person in this united family, and thank you for sharing your genuine love and support for our brother and sister, along with their family and friends impacted by this loss,” Vitale said. “We will grow stronger with each day that passes, but never cease in remembering the brilliant glow that Ryan and Carey brought to this entire campus.”

Before closing the ceremony, Shiner urged everyone to look around at the flicker of the candles illuminating the Quad.

“That is what learning to love each other looks like,” Shiner said. “We leave in silence, but in hope. We will love and care for each other in these dark days.”

As they exited the Quad, community members placed their lit candles in trays of sand to symbolize continual remembrance.

“Although our candlelight here today pales in comparison to the loss of two torches at the torchlight procession of the Class of 2019’s graduation, our light is powerful,” Kegan Thompson said.

The news of the local plane crash has made national headlines. According to Federal Aviation Administration records, Depuy held a student pilot licence issued in October 2013. Federal aviation safety officials are investigating the crash of the single-engine Cessna 150. Due to the publicity of the crash, there has been an outpouring of support on Facebook from alumni who have shared their own posts and reached out to current students, demonstrating that the Colgate community extends beyond campus.

“It’s hard to put into words how much the Colgate experience gives to those of us who are lucky enough to go to school there. My four years were full of laughter and memories that I can look back on fondly. It breaks my heart that Ryan and Carey were taken too soon and won’t have the same chance to find their happiness at Colgate the way that I did,” Wendy Nicolas ‘15 posted Monday night. “Sending love and prayers to Colgate tonight.”

Students were informed of the deaths of Adams and Depuy through a campuswide email Sunday night, despite the crash having occurred earlier in the afternoon around 1 p.m. According to Associate Vice President and Dean of Students Scott Brown, Colgate’s Emergency Management Team was required to abide by nationwide protocols set by the Incident Command System that govern how all institutions respond to emergencies. These protocols mandate that the hometown police of the deceased notify the next of kin before a public announcement is made.

Brown detailed the Emergency Management Team’s course of action on Sunday. A cohort of Colgate staff and administrators, who are trained to handle crises, activated ten minutes after the crash was reported and spent the rest of the day in the Emergency Operations Center. According to Brown, about 30 people were in the conference room the entire time and delegated tasks to various teams. Among the tasks these teams managed were operations, logistics, planning for campus events, counseling and chaplain efforts, contact with and services for families and roommates, communications and public relations.

“Unfortunately it’s a terrible part of a dean’s duty to be doing this, but our role is to help create places for people to really connect in authentic ways,” Brown said. “Our relationships are really important, so the reverberations are pretty intense and we want to be as helpful as we can as people make sense of this.”

The campus community has responded to the tragic news in various ways. A Women’s Studies class spent its Monday session creating posters and displaying them in public buildings across campus in order to provide both a physical reminder of the community’s loss and an opportunity for community members to share their own thoughts. Students in mourning have utilized the Counseling Center and the Office of the Chaplains as resources, while faculty and staff members have been encouraged to seek guidance through the Employee Assistance Program.

“The chaplains and members of the Counseling Center are spending long stretches of their days just being available to students for individual conversations and group conversations. In addition, we had Mass [Sunday] night. We’ll continue to have the different religious services throughout the week… everything from meditation sessions to small group prayer,” Shiner said.

Shiner added that as more details emerge from the families and as the campus community settles into the reality of the tragic event, the Chaplain’s Office will organize memorial services and more appropriate ways to pray and grieve together.

As part of their grieving process, students on campus have gathered together in solidarity. For example, after the vigil Monday evening, the residents of Bunche House welcomed all members of the campus community to use the Social Justice House as a safe space for self-care.

“The feeling of warmth and support we give to each other speaks volumes of the individuals that represent this beautiful campus. That is… why we all feel such tremendous loss. Ryan Adams and Carey Depuy had already become a part of our Colgate family,” Vitale said. “Ryan,Carey, you will always be a part of the Class of 2019.”