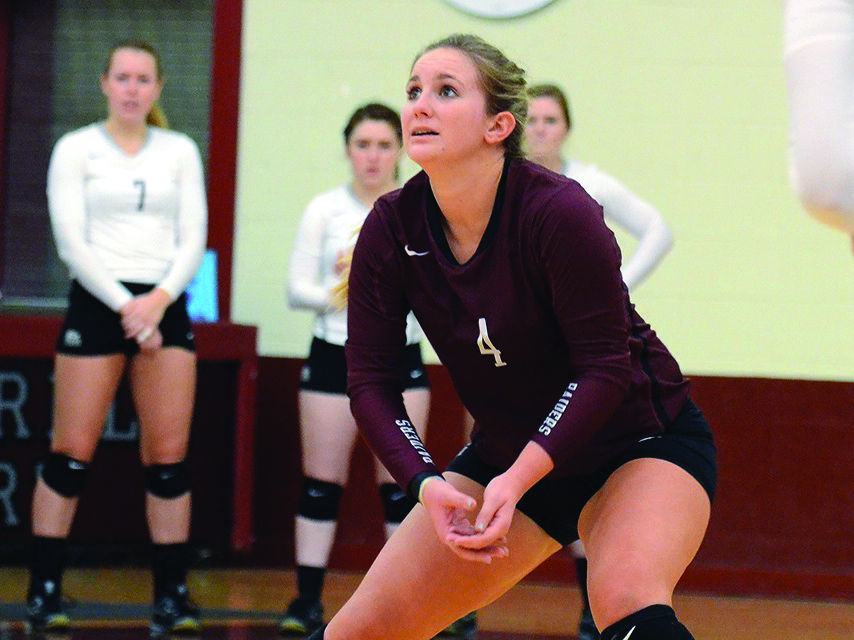 Junior Madison McAndrews comes in strong for the Raiders with a personal best of 34 digs, keeping the ball in play.

Junior outside hitter Kathleen Harris was awarded the title of Tournament MVP, and senior setter Jackie Macy and junior defensive specialist Madison McAndrews were awarded spots on the all-tournament team.

After the Raiders secured a 25-23 victory in a close first set over Bucknell, they used that momentum in the second set and earned a  7-1 point run on their way to a 25-15 win against the Bison.

Colgate established a 13-6 advantage in the third set, to which Bucknell answered with a 6-2  run later in the set to bring their lead down to one. With the score at 23-22, first-year middle blocker Jaelah Hutchison and first-year outside hitter Katie Stansbury each earned a kill to take the set 25-22 and the 3-0 sweep.

“I am so proud of this team…we played one of the toughest non conference schedules in the country and it paid off tonight,” head coach Ryan Baker said.

Harris led the Raiders with a career high of 22 kills, and Macy added a season high of 40 assists. Colgate was down 15-11 in their first set against Delaware State Saturday, but a kill from junior outside and right side hitter Katie Stebbins started a 7-0 run that led to an 18-15 lead over the Hornets, and a 25-18 win.

The score was tied at 10 in the second set before the Raiders took the next four consecutive points to start off a 14-4 run to put the score at 24-14. Although the Hornets answered with three straight points, a kill from sophomore middle blocker Noel Kennebeck gave Colgate the 25-17 victory.

Delaware State took a slight lead over the Raiders early in the third set with the score at 5-4, but Colgate responded with six straight points to take a 10-5 lead. The Hornets rallied later on to bring the score within three at 17-14, yet the Raiders took eight of the last 12 points to take a 25-18 win and the match.

Macy posted 28 assists, and McAndrews led the Raiders with 18 digs.

In their final match of the weekend, Providence took the first two sets 25-22 and 25-21. Colgate rallied in the third set earning a 12-7 lead before taking the set, 25-22. Providence held a slight 14-12 lead before the Raiders answered with five straight points to put the score at 17-14. Although the Friars came back to pull the score within one, the Raiders secured a 25-23 win to force a fifth set.

The Friars took an early 5-3 lead, but Colgate responded with a 6-1 run to create a 9-6 advantage before the Friars evened the score at nine a piece. A kill from Stebbins sparked a 6-0 run that gave the Raiders the 15-9 win and the match.  Harris led with 17 kills, followed by senior right side Kate Reilly with 12 and Hutchinson with 10. McAndrews posted a personal best of 34 digs, and Harris added 15. With offensive capability displayed by these players, it is no wonder that the Raiders were able to capture this momentous tournament victory.

“There [isn’t a] better way to end our non conference schedule than with a tournament championship and our first League win,” Baker said. “It was a total team effort.”

Colgate volleyball now holds a 3-9 record overall, and will host Patriot League team Army on Friday at 6 p.m., followed by a match against Holy Cross on Saturday at 4 p.m. at Cotterell Court. These upcoming games will certainly be defining for the Raiders as they will likely set the tone for the rest of the season.