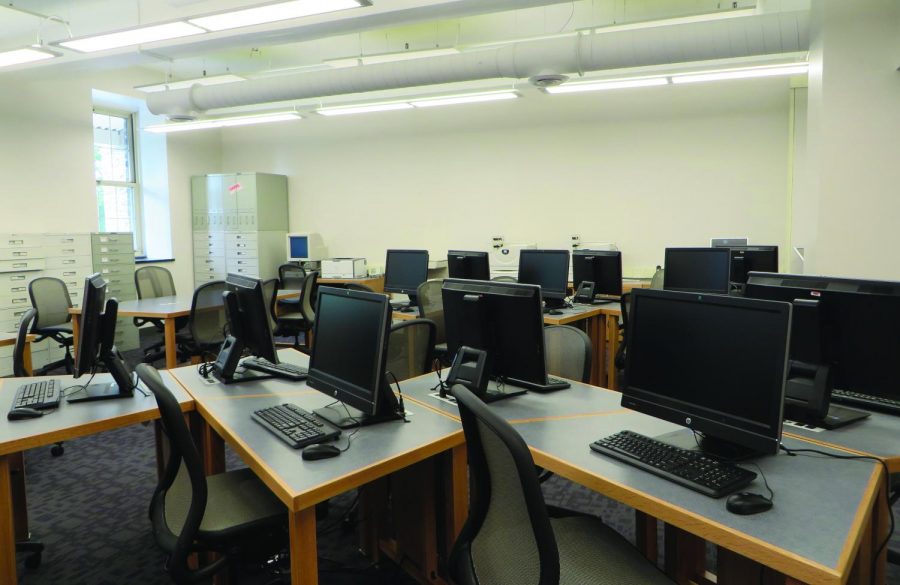 Over the summer, the George R. Cooley Science Libraryunderwent a facelift.

The George R. Cooley Science Library has undergone major changes in preparation for the upcoming academic year. The building has faced serious remodeling, most noticeably the elimination of the second floor. These changes were all part of the renovation of McGregory Hall, where the science library is located. Cooley Science Library now boasts air conditioning, new tables and study carrels, among other changes.

“The walls are red and much brighter, as are the lights. The air is fresher,” junior Yogita Telhu, a student employee at Cooley Science Library, said. The cosmetic changes also include new carpets and furniture.

Tagtmeyer and Mangine’s input helped architects maximize study space, despite the elimination of the upper floor, which now houses the new Center for International Programs. Tagtmeyer had the task of de-selecting any articles or books that were no longer reasonable to house in the science library. Although originally only journals were candidates for de-selection, soon into the project it was discovered that some books also needed to be relocated. While some of these were permanently de-selected from Colgate’s collection, others were transferred to Case-Geyer Library.

“De-selection of materials is done with careful analysis of materials use records, knowledge of the contents of other library collections (ConnectNY) and assistance and guidance from relevant discipline faculty members,” Tagtmeyer said. Colgate’s digital collections also played a factor into which resources were de-selected.

Junior student employee Emily Rooney noted the significance in continuing to have enough room for students to work, even with the loss of one of the library’s floors.

“My boss, Kristi Mangine, did an amazing job designing the library so that even without a second floor, we would still have plenty of seating for students to do their work,” Rooney said.

The George R. Cooley Science library is located on the lowest floor of McGregory Hall. It houses collections about astronomy, biology, chemistry and many other science disciplines. It is named after its beneficiary George R. Cooley, who attended Colgate briefly in 1917. It was dedicated to him in 1981, preceding his death five years later.

The overall consensus from student workers regarding the renovations appears to be positive.

“The students seem to love the changes,” Telhu said.

Cooley Science Library will be having an open house with light refreshments on Wednesday, September 16 from 4 to 6 p.m., with remarks at 4:30 p.m.