Around the Hill: Who is the top Fantasy Football Pick? 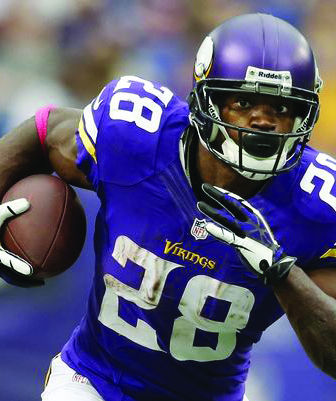 Is Adrian Peterson worth taking with the first overall pick?

While many cite Bell’s two game suspension as a reason to punish the talented running back from the honor of being chosen first overall, I believe that Bell’s season last year makes him a valid candidate to be the top fantasy performer this season. Bell finished strong for the Steelers, putting up 204 and 185 yards in two of the final six weeks of the season. Bell’s push helped Pittsburgh reach the AFC Wild Card game, where they fell to the Ravens without Bell, who was injured.

In addition to Bell’s strong season, in which he finished second in rushing yards in the NFL while adding eight touchdowns, Bell appears to be the go-to guy in this Steelers offense. As Roethlisberger gets a year older, Offensive Coordinator (OC)Todd Haley will look to Bell and the Steelers rushing attack to boost the Steelers offense. While Antonio Brown will be sure to excel on as a wide receiver, look for Haley to seek Bell in many situations.

Entering his third season in the NFL, Le’Veon Bell is poised to make a jump to be one of the best running backs in the NFL. With an experienced pocket passer in Roethlisberger and a balanced OC in Haley, look for Bell to give you the most value with the first overall pick in your fantasy football draft.

For the first time ever, I was given the distinction of picking first overall in my fantasy league. With great power, comes great responsibility, and I knew that I’d have to make the most of the pick or face ridicule from the rest of the league for the remainder of the season.

It wasn’t an easy decision. Do I go with Le’Veon Bell, coming off a stellar 2014 season? I decided he wouldn’t be the best value, given the two-game suspension that must be served at the beginning of the season.

What about Eddie Lacy, entering his third year with the Packers? After two strong seasons in a row, the prospect was tempting, especially given his role in the Packers passing attack. However, he was not my pick.

Despite his age of 30 (ancient in running back years), I went with Adrian Peterson. He has been a consensus number-one pick for the last three (if not more) years, and even though he only appeared in one game last season before a major suspension, he is still the top choice in a small pool of elite running backs. Peterson provides stability at a position normally plagued with injuries, as well as consistency, rushing for over 100 in a game frequently. He will undoubtedly be the feature back in Norv Turner’s offense, and be fed the ball often as Teddy Bridgewater continues to progress. While he may not be as quick as in his younger years, Adrian Peterson was an easy pick at number one.

Eddie Lacy. Ever since Lacy entered the league in 2013, he’s been a crucial part of Green Bay’s high-caliber offense. Lacy is averaging 10 touchdowns per year and it doesn’t look like he’s slowing down anytime soon. Le’Veon Bell’s suspension hurts his case for the first pick and Jamaal Charles is in an offense being led by Alex Smith, making it harder for him to thrive.

The most important reason for Lacy’s success has to be having Aaron Rodgers at the helm. Having a skillful, elusive quarterback that can hit wide receivers while at the same time escaping the pocket definitely helps Lacy. Rodgers, who is also arguably a top pick, has so much talent that defenses are more afraid of him than they are of Lacy, giving Lacy the little bit of breathing room necessary to have monster games.

Being in Green Bay’s offense also means that Lacy is going to be getting a lot of carries while in the red-zone, as Rodgers nearly always finds a way to lead the team downfield. Lacy’s pure strength will no-doubt be hard to stop on the many goal-line carries that he’s going to get.

Finally, the loss of Jordy Nelson due to a torn ACL opens the door for Lacy as well. With only Randall Cobb on the field as the sole distinguished receiver for Rodgers, Green Bay might have to rely more on the run.  Being the workhorse that he is, Lacy will not only carry the offense more, he will also carry your fantasy team to the playoffs.