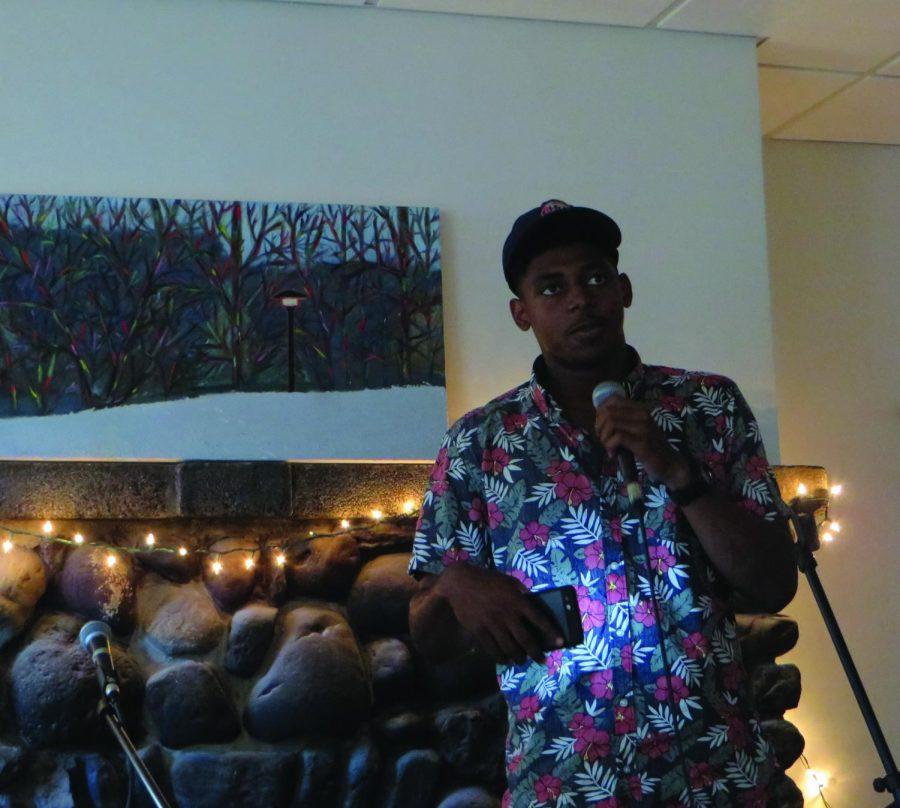 Sophomore Jabari Ajao speaks at 100 Broad Street as a part of the first Lounge event of the year.

The first Lounge event of the year took place on Friday, September 4 at 100 Broad Street. The event was focused around providing advice to first-year students. The Lounge featured student performances such as singing, dancing, reading poems or just expressive speaking. Despite the large number of performances, there were common themes of advice given by upperclassmen to first-year students. A number of people presented lists, such as “13 Things I Wish I Knew as a first-year,” while another shared a letter she wrote to herself as a first-year. The advice given concerned matters of academics, campus life, social situations, homesickness and other

Nearly all of the performers provided tips about professors and classes. They stressed the importance of making an effort to get to know your professors, as they can serve as a valuable resource as well as a strong support system. First-years were also advised to do the assigned readings; the lectures make a lot more sense if you do. They explained that exploring interests is one of the main reasons why people attend college, so many suggested taking courses in subjects you know little about. Many upperclassmen have found their passions through taking a class they never expected to take. Colgate offers a multitude of resources available to students, such as grants and research opportunities. Performers urged the audience to take advantage of these resources to do something useful, such as beginning an independent research project or traveling to another country for a worthy cause.

Although Lounge is a fun way to spend Friday night, it offers much more than just entertainment. Students can learn invaluable advice, gain insight into various aspects of college and get to know each other in an accepting and compassionate environment.

“I think Lounge is valuable because it gives students a chance to express themselves and to challenge one another and also to be supportive in ways that I don’t think a lot of spaces at Colgate do. It also gives students a break from academics,” junior Ashleandra Opoku said.

Attendees of the event were also given tips on how to cope with feelings of loneliness and homesickness. One of the most prominent tips was to force yourself out of your comfort zone and meet as many new people as you can. Performers stressed the importance of always staying true to yourself and to convey yourself as who you really are, not someone you are trying to be. Overall, first-year students found the event to be worthwhile.

“It was inspiring to see fellow students step up and use their own experience to advise us,” first-year Araven Tiroumalechetty said.

After the scheduled performers presented, an open mic was available to anyone who wanted to speak. Some people decided to read poems while others opted to perform songs. As Lounge progressed, a community poem was passed around and those who wanted to could write a line. At the conclusion of the event, a volunteer read the poem out loud. There was also a community art space, where attendees could paint on a large white sheet as a way to express themselves. Many students left this event with a positive attitude and a new outlook on college life.