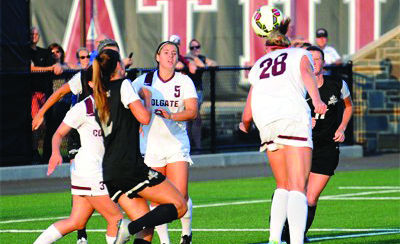 Sophomore forward Emily Crichlow heads the ball against the Providence Friars. Crichlow scored twice, leading the Raiders to a 3-1 victory.

The women’s soccer team returned from an unsuccessful game against the South Carolina Gamecocks on Friday, September 4, losing 2-0, but finished the weekend off with an uplifting win against the Providence Friars on Sunday, September 6, closing with a score of 3-1.

According to the two senior captains, Jenna Raepple and Catherine Williams, the team has been competing against the most demanding non-league teams they have ever faced thus far in the season, although they have an opportunity to capitalize on mistakes and increase their chances of winning.

“We have been playing some of the best teams in the country – the level of competition we have faced has been extremely high,” Williams said. “The team is working hard, but as a whole we need to do a better job of creating scoring chances and finishing.”

Both captains mentioned that scoring goals is what the team struggles with the most this season. They are currently sixth in the Patriot League with a 0.75 goals per game average. In order to meet their goal of winning the Patriot League Championship, they must rise to this challenge.

“Just like how defense is a team effort, so is scoring,” Williams said.  “It needs to come from everyone.”

Last year, the team had one of the strongest seasons in years, almost winning the Patriot League Championship. The Raiders lost to Boston University in the final.  According to Williams and Raepple, they plan to surpass Boston University this year and to continue farther into the NCAA tournament.

“Our goals for the season are not only to win a Patriot League Championship, but we also are looking to go deep into the NCAA tournament and continue to put Colgate women’s soccer on the map,” Raepple said.

Not only are the Raiders going to have to start finishing during games, but Raepple wants to help build a tight-knit atmosphere within the team in order to take them farther in the NCAA tournament.

There are 12 first-year athletes on the team. With such a challenging schedule that lies ahead, they will earn many practice hours in preparation for the Patriot League Tournament later this season.

“Each one of them bring a set of qualities that helps the team in a tremendous way and it will be an amazing thing to watch as they continue to grow as people and players over the years,” Raepple said.

According to Williams, every individual needs to step up in order to achieve

“Something to keep in mind is that leadership needs to come from everyone, first-years to seniors,” Williams said.  “We are committed.  We know what we need to do and we have the group of people to make it happen.”

The Raiders will need to tap into their strengths to keep pace in the  Patriot League. In particular, their goaltending has been strong this season. Their 23 saves over the season rank first in the Patriot League, although their eight goals against indicate their defense needs to improve.

On Friday, September 19 at 4:30 p.m., during homecoming weekend, the team will commence their Patriot League season against American University. The Lady Raiders hope to get the momentum going and build upon their one-game win streak as they travel to Syracuse on September 13th to battle against the Orangemen.