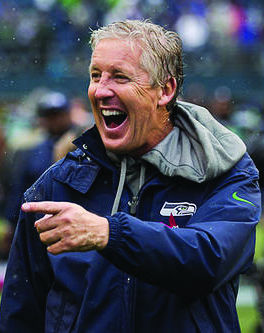 Before the regular season officially kicks off, here is a preview of some contenders this season:

AFC Favorite: Indianapolis Colts. The Colts have a fantastic offense led  by Quarterback Andrew Luck who established himself as one of the league’s best last season. On top of that he has so many weapons at his dispense from explosive wideouts T.Y. Hilton and Andre Johnson to veteran tailback Frank Gore. With this much offensive depth, it is going to be hard for any defense to hold the Colts under 30 points a game. However, the only weak point in the Colts game is their defense. They finished 18th in points allowed per game at 23.0 and 20th in takeaways per game at 1.5. While those numbers are not terrible, they need to play better to survive the later playoff rounds.

Dark Horse: Oakland Raiders. The Raiders have not had a winning season since 2002 and have been irrelevant for most of this century, but this year could actually be different. The Raiders’ offense has the potential to be very dangerous with last season’s emergence of RB Latavius Murray and first-round draft pick WR Amari Cooper. Cooper showed outstanding route-running and pass-catching abilities last season at Alabama, but a lot is dependent on young QB Derek Carr. If he can up his numbers from last season, the Raiders have a chance be a threat in the AFC.

NFC Favorite: Seattle Seahawks. They are possibly the most complete team in the NFL. Their defense is the best in the league as they allowed an outstanding 16.3 points per game last season largely due to a menacing secondary featuring Kam Chancellor, Earl Thomas, and Richard Sherman. On the other side of the ball, they picked up Jimmy Graham in the offseason, who dominates the tight end slot and adds even more depth to their passing game. With this addition, QB Russell Wilson should continue to have success throwing the ball. But the highlight of the Seahawks offense is their running game. If Marshawn Lynch can continue to bully defenders and put up solid numbers, the Seahawks may have a chance to avenge their heartbreaking Super Bowl loss from last season.

Dark Horse: Saint Louis Rams. Defense was not the biggest problem for the Rams last season, as they finished a respectable 16th in points per game. However, their offense struggled a lot more because Sam Bradford could never stay healthy enough to play a full season. So while the Rams had talented pass catchers, they could never be utilized because no one could get them the ball. Now Bradford is gone and Nick Foles is the new signal caller. Foles has incredible talent and performed well with the Eagles in 2013. The one problem is that Foles also has some injury concerns and a rocky 2014 season, but if he can stay healthy and play up to his ability, the Rams could have their first winning season in 12 years.