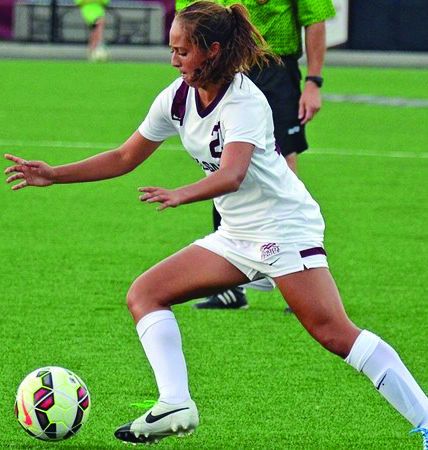 Junior forward Sarah Coy found the back of the net three times this weekend, marking her first career hat trick.

The women’s soccer team started the second part of their season off swiftly, winning their first Patriot League game against American University on Saturday, September 19th.

The end score was 3-1, and all goals were scored by junior Sarah Coy for a hat trick.

“I don’t think that this game necessarily went differently. I think we have just been waiting for everything to come together and click and it just happened at the right time,” Coy said. “It’s a Patriot League game so that in itself gives the game a whole new feel.”

The team has been working on finishing at the goal, which Coy clearly picked up on during the game.  Because the team has faced a more difficult schedule this year, they have been forced to compete at a higher level, helping them to prepare for Patriot League games.

“I think our team is handling our schedule very well. Obviously we might not have walked away each time with the outcome that we wanted, but I think it’s important to schedule games and compete with the best. This benefits the team because it gives us the proper exposure we need to prepare us for the conference games that follow,” Coy said.

Head Coach Kathy Brawn said that the team played so well due to their attacking mentality and their ability to be proactive, resulting in their most complete game yet.

“Our team thrives in a competitive environment and relishes the opportunities to play on a big stage. The experience of facing a variety of opponents pays cumulative benefits. Our readiness for each game relies on lessons learned and skills acquired from prior matches,” said Brawn.

Both Brawn and Coy said that the team is so strong due to their tight knit sense of community, and ability to rely on each other.

“Both individually and collectively, they are strong, empathetic, fun loving, intelligent and athletic. Our strength lies in our ability to function as a unit and bring out the best in ourselves and one another,” Brawn said.

Coy added that the captains and team dynamic are the team’s biggest strengths this season.

“That bond is especially important when it boils down to facing a team with equal talent.

“We are willing to fight for the person next to us because we are a part of something bigger than ourselves,” Coy said.

In order to achieve their goal of winning the Patriot League this season, the team must use this bond to make the difference when playing other teams.

“Winning is the by-product of good practices, talent, heart, preparation, determination and teamwork must all come together in order to achieve our goals of winning a Patriot League championship and making a run in the NCAA tournament,” Brawn said.

The Lady Raiders hope to keep the momentum going as they travel to Lehigh this Saturday and host Boston University on September 30th. With a 3-5 overall record and the postseason right around the corner, these upcoming matchups are critical for the fate of the team’s playoff chances and hopes of