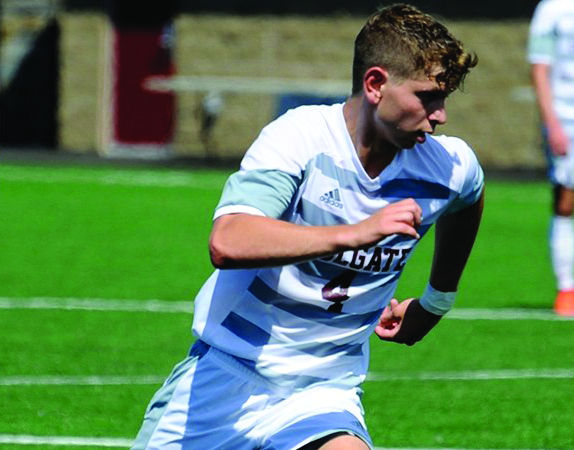 Geisler scored off a set piece over the defense boosting Raiders to a 1-0 lead.

Colgate Men’s Soccer kicked of the 2015 season this past weekend with impressive play on the pitch as they faced the Northwestern Wildcats in Chicago, IL. The team looks to build on the momentum of the last two seasons with a new group of talented first year players, skillfully led by veteran returners.

Just eight minutes into the match, the team had already been pressing the opposing goalie with a quick shot on net by junior midfielder Ethan Kutler. Seven minutes later, sophomore defender Benji Geisler scored off a set piece over the defense, giving the Raiders a 1-0 lead.

Northwestern was able to tie the game late in the first half, but not before junior goalkeeepr Ricky Brown prevented a goal off of a Northwestern corner in the seventh minute. The Raiders dominated the ball with double the number of shots on goal than the Wildcats, but entering the second half, the score was still tied at one.

Defense was critical to the rest of match as neither team was able to score another goal. The Raiders’ hard-nosed play got the team into some foul trouble with sophomore midfielder Troy Moo-Penn and junior midfielder Colin O’Neil both being served yellow cards. In the 53rd minute, O’Neil was served with a red card, leaving him unable to continue the game, and the team to finish with one man short. Luckily these setbacks did not deter the Raiders, as Brown went on to save six more shots and force the game into overtime.

At the end of regulation, with the game still tied at one, both teams were looking for a mistake from the opposing defense and any potential opening to score another goal. After an electrifying eleven minutes of overtime, senior forward Tyler Forbes was able to control the ball and take a shot on goal to try to claim the win for the Raiders. Unfortunately, Wildcat goalie Zak

Allen was able to make a remarkable save to preserve the tie at one.

In the final minute of the second overtime period, the Northwestern Wildcats kicked a cross, a final prayer, but the seemingly impenetrable Raider defense was able to fend it off as time expired. The game ended in a draw, but the team came away with a lot of confidence in each other, in their game and in their resilience all throughout the match.

“Coach Ronning made it clear that our success was going to come from our ability to press Northwestern in their half of the field. We were able to do this very well, which led to great attacking chances and several set piece opportunities… We’re feeling very confident after a solid result in this game. It’s important to stay mentally sharp and focused for our next opponent. The best way to prepare for the weekend is to rest our bodies and work hard in training to strengthen any weaknesses our coaches found in our last match,” sophomore defender/midfielder Chase Pagani said.

The team now looks forward to playing in their home opener, the Central New York Classic, on Beyer-Small ’76 Field against Rutgers on September 4, and UC Riverside on September 6. Both of these games are imperative, as they will set the tone for the rest of the season. Coming into the season with the right mentality will hopefully carry the Raiders to the Patriot League championship.