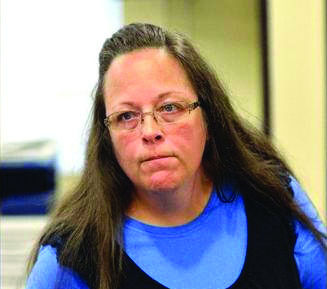 The United States Supreme Court took one giant step for mankind on June 26, 2015 when it legalized same-sex marriage in all 50 states. A Supreme Court ruling is the law of the land and one will be jailed for not following or upholding such laws. Kim Davis, the clerk of Rowan County, KY, has been sitting in her local jail since Thursday, September 3 for refusing to administer marriage licenses to multiple same-sex couples in accordance with her own religious beliefs. This is not her first time trying to singlehandedly derail and undermine SCOTUS’ ruling. On August 13, The New York Times reported that Davis didn’t show up to work the day after Judge David L. Bunning of the United States District Court for Eastern Kentucky ordered her to begin issuing

licenses to those seeking to get married.

The ongoing contempt lawsuit and her subsequent incarceration has garnered a large amount of support from her fellow Christians and homophobic brethren across the nation for Davis, a Democrat and Apostolic Christian. According to NBC News, Davis has been married thrice but she claims that same-sex marriage is not of God, to add insult to irony. Davis supporters have been protesting for her release from jail by using signs and posters with “Freedom of Religion” printed over a picture of the American flag. To be honest, I don’t really know what they’re trying to say—that Davis is above the law because of her own religion? That she can blatantly defy our Supreme Court because of a personal belief? I don’t think that’s what our founding fathers meant when they declared freedom of religion. In fact, they were advocating for separation of church and state and the absence of religious influence in our legislative, judiciary and executive branches. At this point, I don’t know who is stupider: Kim Davis or the people that like Kim Davis.

Her current husband, one Joe Davis, took over her Twitter as a platform for her followers to stay up to date during her time in jail. Her account is gone as of now, but not before Mr. Davis embarrassed himself and his wife even more than they already have. Rob Delaney, a stand-up comedian, actor and ironic Twitter personality, tweeted a joke show of support for Kim that goes as follows:

“Kim Davis, May our Prayers be your pillow as you sleep the sleep of the Righteous, imprisoned by Obama’s gay storm troopers. #Jeb!” It’s clear from his Twitter timeline that Rob is just making fun of Kim Davis, but Joe actually retweeted this and added, “Amen. Thank you Rob.” You can’t make this stuff up. Mr. Davis spoke out in anger to The New York Times on Sept. 3 after the court decision to hold Kim in jail for contempt.

If there is one good thing to come out of this mess of bigotry and lawbreaking, it is that I now know which idiots to definitely not vote for in the upcoming 2016 presidential election. Governor Mike Huckabee and local doofus Ted Cruz have both expressed their backing for Davis, cementing their support with the hashtag #ImWithKim. So thank you, Kim Davis, for really showing America who should not be our next president.