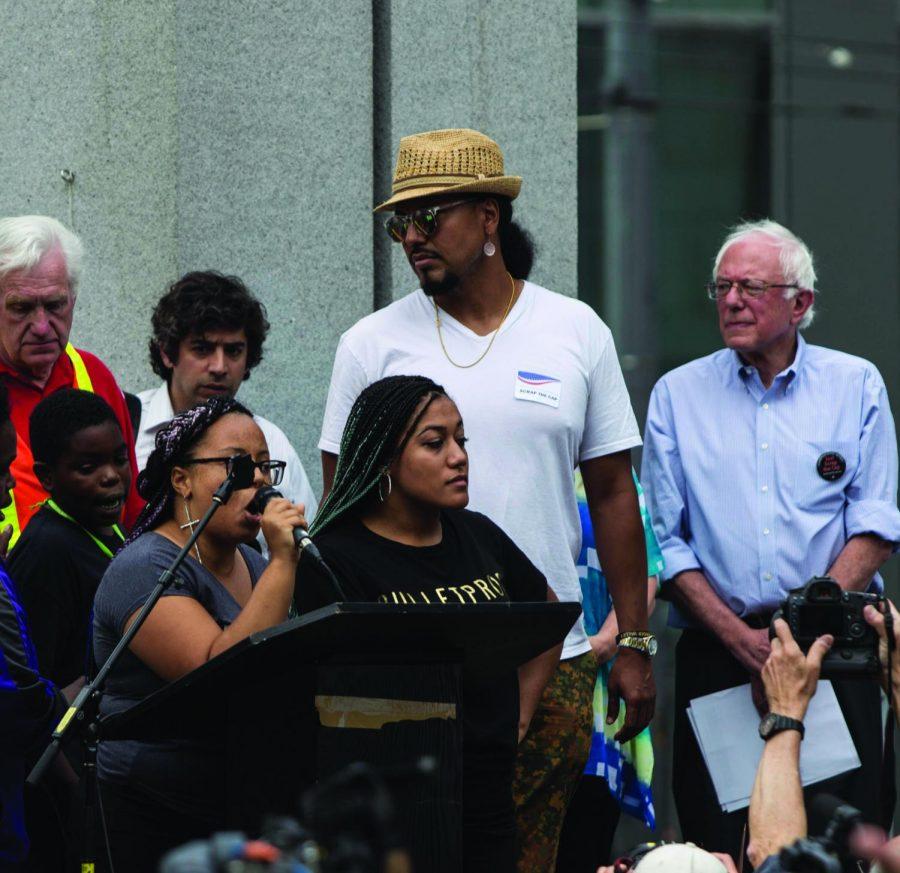 Protestors take over the stage at a Bernie Sanders rally in Seattle on August 8.

On August 8, 2015 there was a dramatic confrontation between the Black Lives Matter (BLM) activist group and Bernie Sanders, a far-left senator from Vermont running for the Democratic Party nomination. Sanders has been lauded for his progressive stances on racial and economic inequality. However, over the summer he focused more on the economic issue of rebuilding the middle class while largely ignoring racial issues. This shift angered many black citizens, especially two vocal BLM members, who felt that their interests were being snubbed. The conflict culminated during a Sanders rally in Seattle on Saturday, August 8, 2015, when the co-founders of the city’s BLM chapter, Marissa Janae Johnson and Mara Jacqeline Willaford, stormed the stage and demanded the mic. Johnson introduced herself and her title and was booed by people who had waited to hear Sanders talk.

“I was going to tell Bernie how racist this city is, filled with its progressives, but you already did it for me, thank you,” Johnson said to the booing crowd. Johnson’s approach was reactionary at best. It’s one thing to be full of yourself enough to think that you have a right to interrupt someone else’s rally, but then to think that the disapproval from the crowd is aimed at skin color just because you are black is a whole other level of self-absorption. The people in the crowd want to see change; they want racial justice, they’re not bigots. The crowds those women should have been attacking were the violent mobs in Ferguson that cast a shade on those trying to actually make a difference in a civilized manner.

In order for any change to be made, activists have to keep a level head and express their concerns in a cordial manner. When was the last time someone who you didn’t know screamed in your face that you’re wrong, and you wanted to listen to them? If they had instead been a part of the crowd and waited until the end of Sanders’ rally to express their concerns, the rest of the crowd might have been more open to hearing what they had to say. Black Lives Matter is a perfectly respectable group and is fighting for a good and just cause, but when people like Johnson and Willaford interrupt the most progressive candidate in the running and call his followers bigots they only serve to take legitimacy away from their own group.

Sanders has unveiled a multitude of plans to address racial justice and other social issues including making public universities tuition-free, eliminating for-profit prisons, stopping the purging of minority-community names from voting rolls and requiring police officers to wear body cameras to expose or stop excessive violence against minorities. So it seems that these women have gotten what they wanted – more focus on racial justice from Sanders. Although their strategy worked, this radical approach is not a constructive way to bring about change. These women have struck a blow against their own group, as many people are upset with the whole Black Lives Matter activist group because of what these women did. They are obviously unaware that when you go in front of the population screaming in the name of your group that you are representing the entirety of that group, and that no one wants to listen to a bunch of people screaming in your face and insulting you. American politics has enough hot-heads screaming at each other as it is.