A Transition in Administration: Jill Harsin Steps Up as Interim President 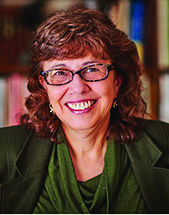 As the members of Colgate’s Class of 2019 arrive on campus, they begin to navigate their new role as college students. Former Professor of History Jill Harsin similarly faces a transition as she adjusts to her new position as the university’s interim president. She succeeds Colgate’s 16th President Jeffrey Herbst.

Harsin, who has worked at Colgate for 33 years and has held a variety of positions, including Chair of the Department of History and Director of the Division of Social Sciences, stated that during her presidency she would like to continue the excellent work put into place by those before her.

“I think the most important thing is forward momentum because we’ve got a lot going on for the coming year. We’ve got a lot of things in [progress],” Harsin said.

Harsin added that one of the first steps she is taking as president includes preparing for Colgate’s 2019 bicentennial celebrating the university’s 200 years of existence.

“We’ve been doing some early planning so we [can] start to involve the entire campus in talking about the bicentennial and thinking about how we can use it to recommit ourselves to a good future with Colgate,” Harsin said.

In the year following her presidency, Harsin will return to her teaching position at Colgate. While she enjoys the broad perspective that the presidency affords, Harsin admits that her real passion is for teaching.

“I’ve been here since 1982, and almost all of those years I’ve taught. So I miss it, and I miss being up on the quad. I miss being part of the life of the students on the campus. So it will be great to go back,” Harsin said.

After Harsin’s return to her professorial position in 2016, Brian W. Casey, the current President of DePauw University, will replace her as Colgate’s 17th President. Casey graduated from the University of Notre Dame with a Bachelor of Arts  (BA) in philosophy and economics and then graduated with honors from Stanford University Law School, where he earned his Juris Doctor (JD). Since then, Casey has worked on Wall Street, earned his doctorate (PhD) in the history of American civilization from Harvard University, acted as an Associate Dean for Academic Affairs in the Faculty of the Arts and Sciences at Harvard University and served as Assistant Provost at Brown University.

Casey’s nomination was the culmination of deliberations where students, staff and members of the university’s Board of Trustees collaborated to secure a candidate best fit for Colgate.

This enthusiasm for Colgate’s period of transition is echoed among the student body as well. Senior Joanna Howe was one of three students chosen to aid in the presidential search process.

“Our committee was looking for someone with great personal energy and charisma, who we could easily see as Colgate’s next great leader. The committee was made up of individuals representing all different parts of Colgate: administrators, trustees, professors and students. While each group had their personal constituencies’ concerns and desires in mind, we also worked extremely well as a team to find a candidate we all had confidence in. As a student representative on the committee, I was able to search for a student-friendly candidate who understood the importance of student voices, opinions and concerns,” Howe said.

Howe added her own thoughts on the committee’s selection.

“Brian Casey has a reputation for being a student-friendly president. At DePauw he is extremely well liked by students. He is involved, visible and communicative on campus. I’m extremely excited to see what the future will bring.”

The search for President comes after Herbst did not renew his contract. Herbst leaves the school with a legacy of a record-breaking fundraising campaign, which raised nearly $500 million. In addition, Herbst introduced a plan to construct residential learning communities, encouraged innovation at Colgate through the Thought Into Action Entrepreneurship Institute and introduced multiple renovation projects, including a new Career Services building, the Center for Art and Culture and an additional athletic center to be completed in 2016.