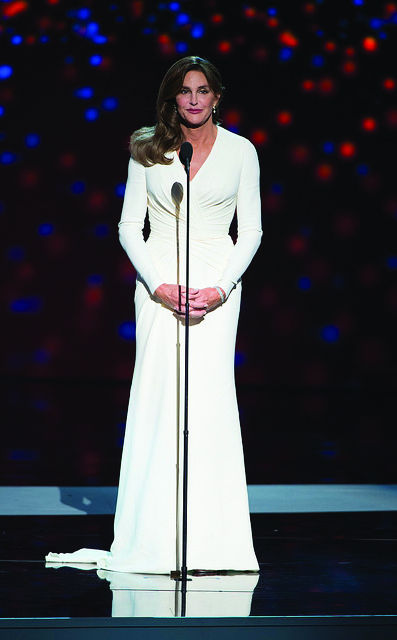 Transgender awareness has burst into the foreground of social media, TV shows and movies within the past year and a half. Jared Leto’s Academy Award-winning performance as a transgender woman in Jean-Marc Vallée’s Dallas Buyers Club, Laverne Cox as Sophia in Netflix’s “Orange is the New Black” and Caitlyn Jenner’s public transition on the July cover of Vanity Fair all represent the growing support of the transgender community. Sort of.

Caitlyn Jenner has given us a lot to think about over the past year. At age 65, Jenner, an Olympic gold medalist, father of six and step-father of four, transitioned into Caitlyn Jenner after keeping her true gender identity a secret until this year. She received widespread support as well as a barrage of hateful comments and ignorance via Instagram, Twitter, Facebook and Fox News. On April 24 Jenner confirmed her transition to Diane Sawyer in an exclusive interview that aired on ABC News. The Vanity Fair cover, featuring Jenner in a low-cut top with “Call me Caitlyn!” as the headline, came out just over a month later. By mid-July, she won the Arthur Ashe Award for Courage at the ESPYs and gave a moving speech decreeing acceptance of trans people. In addition to being in the spotlight as Caitlyn for the past four months, Jenner has been the patriarch to the entire Kardashian-Jenner clan on E!’s “Keeping Up With the Kardashians” since the show’s airdate in 2007. She’s probably one of the most famous people in the world right now—so why is no one talking about her February 7 car crash that left one person dead?

According to a Los Angeles Times article published on August 21, Jenner was driving on the Pacific Coast Highway in a black Cadillac Escalade and pulling an off-road vehicle behind her. When traffic slowed suddenly, she rear-ended Los Angeles resident Kim Howe’s Lexus into oncoming traffic where it immediately collided with an oncoming Hummer. Howe died at the scene. Another car was involved in the crash, but the driver sustained no injuries.

Interestingly enough, the crash received very little publicity. Jenner did not mention or refer to the incident in any of the interviews or appearances she’s done since then. She now may be facing traffic misdemeanor manslaughter charges from the Los Angeles Police Department if found guilty of negligence since there were no drugs, alcohol or cell phones involved. These are serious charges—attorney Dmitry Gorin told the LA Times that Jenner could face up to one year in jail, fines and restricted driving privileges.

In the wake of the deadly car crash, Jenner still went full steam ahead into a whirlwind of publicity throughout the spring and summer. I do understand why Jenner wouldn’t talk about the crash in interviews about her transition and new life, but I find it both inappropriate and wrong for her to have won an award for courage while only having issued one statement to the public on the incident. That’s not okay. We’re allowing Jenner to slide past scrutiny and judgment in favor of paying attention to her new reality show, her hot new rumored girlfriend and her relationships with the rest of the Kardashians. Her decision to come out so publicly and famously was incredibly brave, but that does not absolve her guilt or responsibility over the crash.

The Arthur Ashe Award for Courage, presented by ESPN, is presented to the athlete or sports affiliate that has made the most substantial humanitarian contribution in the past year. The winner is chosen by voters online. Other deserving sports figures this year were Lauren Hill, a college basketball player who died from an inoperable brain tumor, and Noah Galloway, an army veteran who lost his left leg and left arm to a roadside bomb in Iraq. Jenner did an incredibly courageous thing for herself and the entire transgender community, but accepting a largely humanitarian award after being partly at fault in the death of someone is wrong. Jessica Steindorff, the other woman involved in the car crash, was offended by Jenner’s win.

“I find it difficult to understand how the culture we live in can honor a person who is responsible for taking a life and injuring several others with both an award and a reality show,” Steindorff said in an interview with “Entertainment Tonight.” “For an individual who is such a positive role model in many aspects of her life, Caitlyn has failed to do the right thing and take responsibility for her actions.”