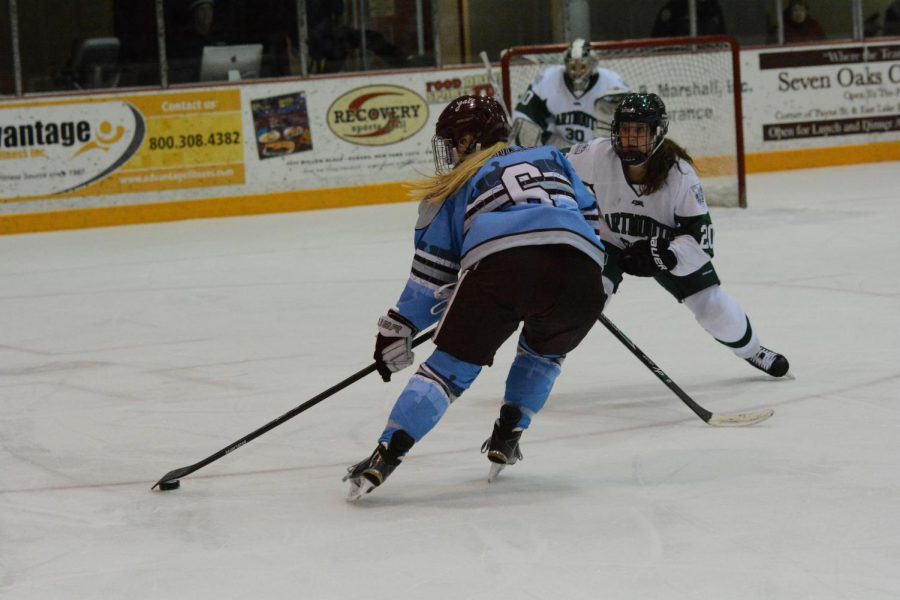 This past Friday the women’s ice hockey team hosted Dartmouth for their Autism Awareness game. The Raiders wore special  jerseys to show their support for this great cause, but unfortunately were not able to get the victory against Dartmouth, as they lost five-two.

The Raiders got several hundred fans to come out to support their cause and to watch them play.

This game started off very slowly and the first period ended with both teams scoreless. This slow beginning however, did not last, as Dartmouth got on the board with their first goal of the game minutes into the second period off a power play. Colgate soon answered with a goal from senior Melissa Kueber to tie the game up.

While the game seemed even-matched up until the second period, Dartmouth put two more goals in the back of the net before the second period was over. Halfway into the third period, first-year Megan Sullivan made an incredible play, diving towards the puck in front of the Dartmouth keep, her sticking catching the puck and pushing it past the goal line before the away goalie could respond.

In an effort to generate some last offensive opportunities, the Raiders pulled their goalie. Dartmouth took advantage of the empty net and sealed their win over the Raiders. Dartmouth outshot the Raiders 35-25 and had the possession of the puck in the Raiders defensive zone for the majority of the game. “[We made] a couple mistakes and they capitalized. It was a tough way to end that period,” said Head Coach Fargo.

The Crimson dominated the game play and pulled away with a 5-0 victory over the Raiders. In terms of shots on net, the Raiders tallied a mere 18 to Harvard’s 36. While the Raiders had several power play opportunities, they were just unable to find the back of the net. In light of their loss, Fargo highlighted some of the positives from the Harvard game.

“They didn’t quit. That was one of the things we talked about after getting off to a tough start against a very good team,” Fargo said when asked how the team managed to rebound so well.

The women’s team has only two games remaining in regular season play, both of which are away. This coming Friday, they saddle up to head down to Schenectady, N.Y. to play Union. From there, the Raiders travel to Troy, N.Y. for their Saturday tilt against Rensselaer.

The Raiders overall record is 7-24-1, and their ECAC hockey standing is currently tied for ninth with Rensselaer.

With the ECAC Hockey Tournament just around the corner, these last two games are going to be huge for the Raiders moral going into post-season play.

Luckily, both Rensselaer and Union have worse records than Colgate. If the Raiders can play the game that they are capable of, they stand a good chance of winning. If you want to see the women’s hockey team hopefully turn the end of the regular season around, you can watch the game live on the Colgate