Men’s Basketball Goes Up and Down on Week 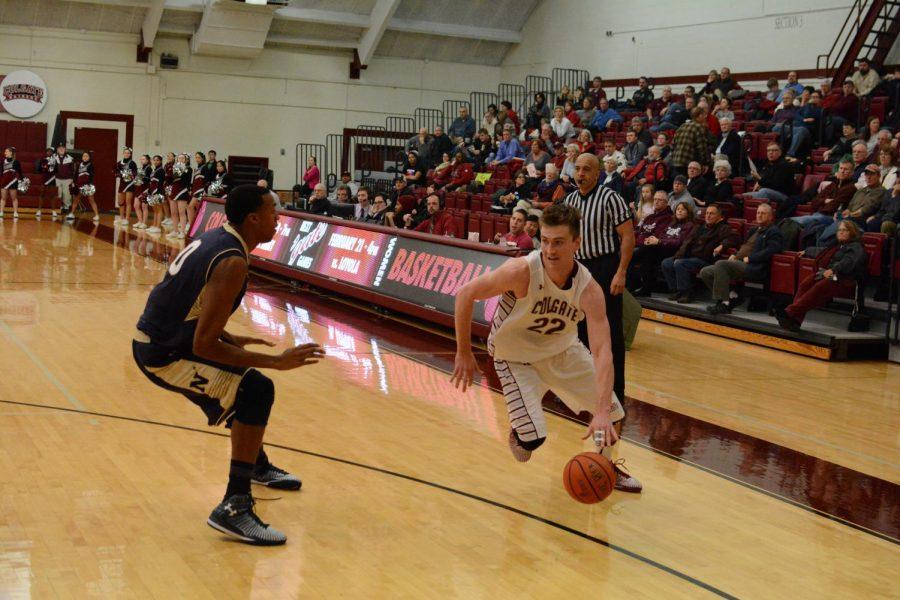 p on first place of the Patriot League after a 1-1 week against conference competition.On Wednesday, the Raiders journeyed to Boston to take on the Boston University Terriers, winning 76-69. Senior guard and captain Luke Roh had a sensational game against the Terriers, scoring 15 points on five of six from the field, while playing nearly all 40 minutes. While the scoreline suggests the Raiders had a good handle on the game, it was more a product of fantastic closing and free throw shooting by the Raiders in the final minutes.

With 50 seconds remaining, senior center Ethan Jacobs pulled-up from downtown to give Colgate the lead, which the Raiders would not give up the rest of the way. After a Terriers bucket, the Raiders led 71-69. Phenomenal free throw shooting sealed the deal, with Colgate making five of six freebies to put this game in the books.

The Raiders hosted the United States Naval Academy this past Saturday in what ended up being an incredible comeback for the Midshipmen. Colgate shot an outstanding 53 percent from behind the arc, but the tale of the tape came from the free throw stripe. Jacobs continued his dominant play, notching 19 points to accompany senior forward Matty McMullen’s 13 points on five of six shooting. The Raiders dominated the Midshipmen for 38 minutes of the game. Going into the final two minutes, Colgate held a 12-point lead after junior guard Austin Tillotson made a runner in the lane.

Where Colgate excelled at closing the game and making free throws against the Terriers, the Raiders could not buy a free throw against the Mids, but credit Navy senior forward Worth Smith for putting his team on his back during the comeback. Worth had 20 points in the second half, making two huge three-pointers in the final two minutes. With Colgate in the bonus, the Mids made this game a shooting contest, fouling the Raiders on each of their possessions down the stretch. Unfortunately for Colgate, the Raiders were not able to convert the one-on-ones, relinquishing the lead slowly as Smith made bucket after bucket.

With time running out, and the Mids up by one point, Roh had his shot altered on the way to the rim, falling short but getting tipped back out to Tillotson. In what would have been devastating for the Mids, Tillotson squared up and launched a potential game-winner that did not fall for the Raiders. Losses like this stick with the team for a long time, but McMullen said they are essential in terms of preparing the team for bigger spotlights in the postseason.

“We have come back a little bit better each time, [and] I think it is part of the process in terms of getting us to the level we need to be at to try and string three in a row together come tournament time,” McMullen said.

The Raiders travel to Baltimore, Maryland this weekend to take on the Loyola University Greyhounds in their second meeting of the season. Previously, the Raiders edged the Greyhounds 59-58 on Cotterell Court in a nail-biter. Colgate has a challenge ahead of them this weekend against a team that likes to disrupt the steady pace the Raiders try to establish each game.

“Loyola is a team that is difficult to play against because they do everything they can to make the game as chaotic and choppy as possible. That’s really the identity of their team so we need to make sure that we are prepared to handle that and keep our composure and stick to playing our game rather than letting them dictate the pace,” McMullen said.

With just under two weeks left in the season, the Raiders look to pull back into first place, and secure a better seed for the Patriot League tournament. Unfortunately for the Raiders, there are no easy games ahead for them, as McMullen described the league as being “so competitive from top to bottom that every single night is an absolute battle.”