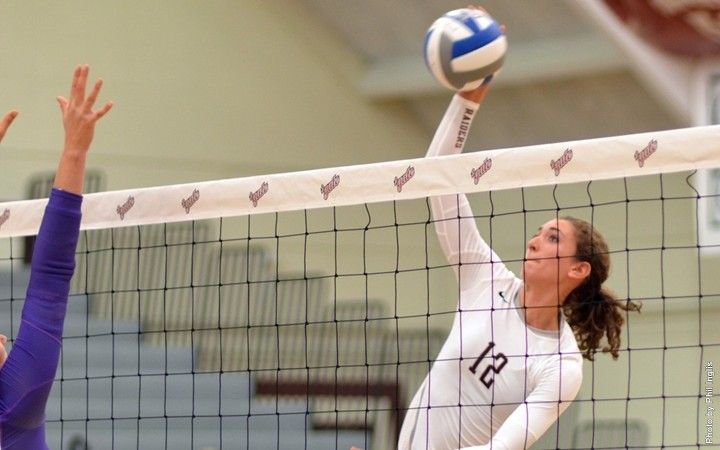 The women’s volleyball team opened the 2014 season Friday afternoon with a 3-2 win against Niagara University at Cotterell Court. This year’s roster carries sixteen women and

Senior middle blocker Diane Seely led the Raiders with 17 kills, followed by sophomore outside hitter Kathleen Harris contributing 13. Together they combined for 30 of Colgate’s 56 kills over the course of the match. Junior setter Jackie Macy led the team with 43 assists and 23 digs. First-years Elena Simpson and Lauren Sanderson also had admirable performances in their college debuts, posting 13 digs and eight

At the start of the fifth set, the score was tied at two before the Raiders went on a five-point run to secure a 7-2 lead. The Raiders were able to preserve their lead, pushing the score to 13-6. Nonetheless the Purple Eagles came back, earning 7 of the next 8 points to bring the score within one at 14-13. But Seely countered with her 17th kill of the night to defeat Niagara

When asked about the match, Head Coach Ryan Baker had positive comments about the team’s first match of the season. “It was exactly what I expected. We’re young, inexperienced and have a lot of new players on the court for us,” Baker said.

“Give Niagara a lot of credit, they were scrappy, they made us make plays and we struggled at times. But it says a lot about the team because we found a way to win.” After Friday’s match, the Raiders improved to a 6-3 record for season opening matches under Coach Baker.

In a recent preseason poll conducted by the Patriot League, Colgate was predicted to finish second in the upcoming season. Colgate, with 104 votes and 2 first-place votes, fell short to American University, who received 128 and 16 respectively.  The Raiders beat out Army for the number two spot by two votes, another likely threat for the upcoming season. Lehigh and Navy were voted fourth and fifth respectively, followed by Loyola, Bucknell, Holy Cross and Lafayette.

The Eagles likely have a slight advantage after defeating the Raiders in the finals last year to win the 2013 Patriot League Volleyball Championship, making it the 11th time the Eagles have earned the title in the past 13 years. American made history,

This coming weekend the Raiders will be traveling to play in the Penn Invitational in Philadelphia. Some of the

competition they will face includes Cleveland State, Georgetown and the University of Pennsylvania.