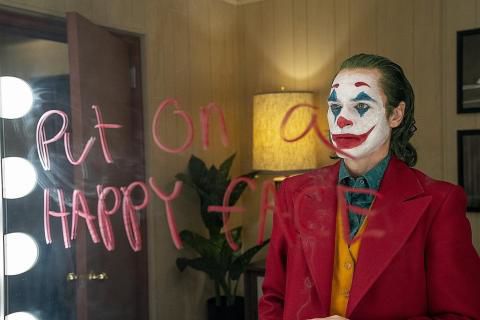 Todd Phillips’s “Joker” became the first R-rated movie to gross more than one billion dollars in the box office, and was nominated for an astounding 11 Oscars. It walked away with two: Best Actor and Best Original Score. The role of the Joker is iconic—as played previously by Jack Nicholson and Heath Ledger. However, Joaquin Phoenix is able to make the character his own, under the direction of director/producer/screenwriter Phillips. In crafting a unique original story, we are presented with Arthur Fleck (who later refers to himself as Joker), a poor, mentally-ill man who takes care of his mother and relies on social services for medication. Working as a professional clown, Fleck dreams of becoming a stand-up comedian.

Phoenix displays one of the best, if not the best, performances of his career. Infamous for his dedication to his portrayals, he lost 52 pounds, studied videos about pathological laughter and read books about political assassinations. His version of the Joker is difficult to have sympathy for, but we are made at the very least to understand his pain, and that he is not entirely at fault for the source of his troubles. Phoenix captures the loneliness, frustration and anger of Fleck in both subtle and apparent ways, from the intonations of his voice, gestures and more.

The tone is grim and dark throughout, elevated by the well-depicted setting of Gotham City. Wrought with class tensions and moral and physical decay, Fleck’s descent into madness is matched by the city’s revolution against the wealthy. The riots brew throughout, culminating in a world that resembles the Joker’s anarchic kingdom.

Other gold nuggets to look for in the film are Robert DeNiro’s surprising supporting role as a talk show host, as well as cameos of the Wayne estate and family. Phillips’s villain origin story may not be perfect, but it’s definitely way more refreshing than DC Comics’ recent revivals of the Batman superhero universe.