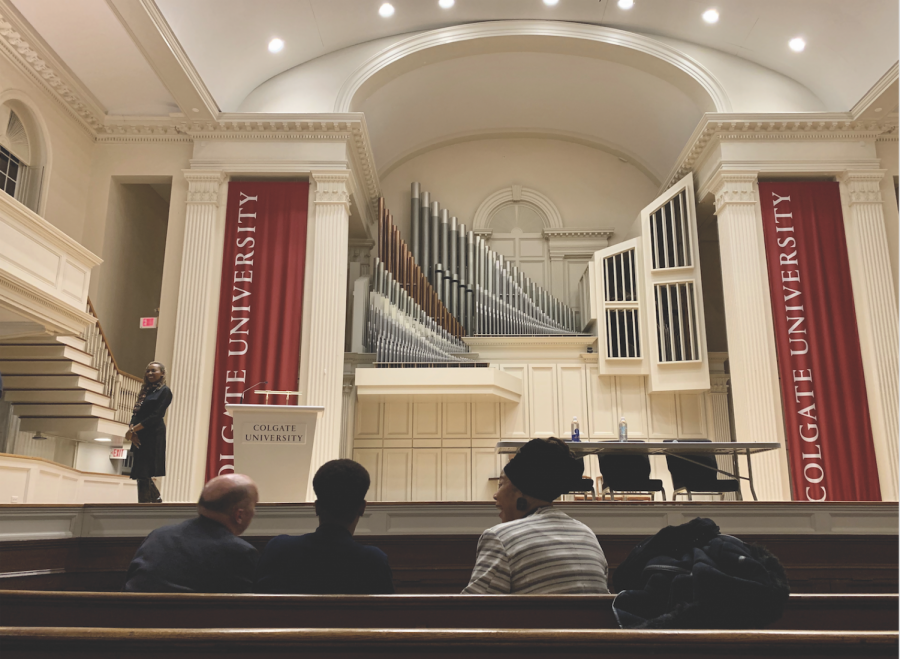 Co-Founder of Black Lives Matter Opal Tometi joined Visiting Assistant Professor Dionne Bailey and senior Taylor Dumas in conversation for the MLK 2020 Keynote Address, concluding the annual week-long celebration of civil rights leader Martin Luther King, Jr. Tometi was welcomed to the stage of the crowded Memorial Chapel on Thursday, January 30, by Interim Director of ALANA Cultural Center and LGBTQ+ Initiatives Director Tiffany Lane after a photo-op session with Tometi and attendees. The conversation between Tometi, Bailey and Dumas lasted one hour, ending at 8:00 p.m. with a question and answer session open to the audience. The event was organized by

Discussion topics covered ranged from Tometi’s early days as a student activist in Arizona to the influential protests and organizing in Ferguson, Missouri in 2014. Dumas, a student long involved with activism on campus as a chairwoman of Sisters of the Roundtable and current president of the Black Student Union, began the conversation asking Tometi about her background and early days in her activism.

Tometi began telling the story of her childhood in a suburb of Phoenix, Arizona, the daughter of Nigerian immigrants in an environment of anti-blackness and anti-immigrant sentiments.

“I became an advocate because of what I witnessed in my personal life,” Tometi said. The activist recounted the deportation scare her parents had during her high school years, and described the impacts of her aunt’s deportation and the resulting separation of her family.

She went on to describe her early years of activism at the University of Arizona, where she received a Bachelor of Arts in History and a Masters of Arts in Communication and Advocacy. Tometi discussed her on-the-ground work in domestic violence shelters, leaving water bottles in the desert for crossing migrants and going door-to-door in neighborhoods.

“There I focused on the physical work, what I could get done with just myself,” Tometi said. She emphasized the importance of student activism beginning with action, focusing on physically showing up to support causes on campus.

Dumas and Bailey asked Tometi about the origins of the Black Lives Matter movement and her involvement in its early organizing. Tometi, taking a somber tone, asked the audience to raise a hand if they remember where they were when George Zimmerman was acquitted for the killing of Trayvon Martin. She then described her own memory of learning the verdict of the case that spurred her to action.

“I remember standing on the street outside of the movie theater, just sobbing with my friend, who also was an organizer, who also had been involved in this work,” Tometi said.

“We come from a tradition of freedom fighters,” Tometi said.

Tometi, Bailey and Dumas discussed the many ways in which anti-black racism and anti-racist activism has evolved since the work of Martin Luther King, Jr. in the 1960’s Civil Rights Movement.

“Manifestations of racism shift,” Tometi said. “I actually believe that all lives matter, that’s why I created Black Lives Matter.”

Senior Noah Francois left the conversation with Tometi hopeful about the change it could inspire at Colgate.

“I thought seeing a lot of non-black faces was really refreshing,” Francois said. “After coming here today maybe different kinds of people will feel more comfortable and see this as everyone’s issue.”

Dumas expressed her gratitude in being selected as a student participant in the MLK Keynote.

“The fact that I was asked to be in this important role was just such an honor, and I just hope that people were able to learn something that they can bring back and act on,” Dumas said.

Dumas also discussed the significance of the Colgate community watching an all-black, all-female conversation on the Black Lives Matter movement.

“In the media, like Opal was saying, Black Lives Matter is seen as something male-centered, male-lead, when in reality black women play an important role and play a fundamental role in actually fighting for black lives and all lives,” Dumas said.

The MLK Keynote was organized and sponsored by the ALANA Cultural Center.