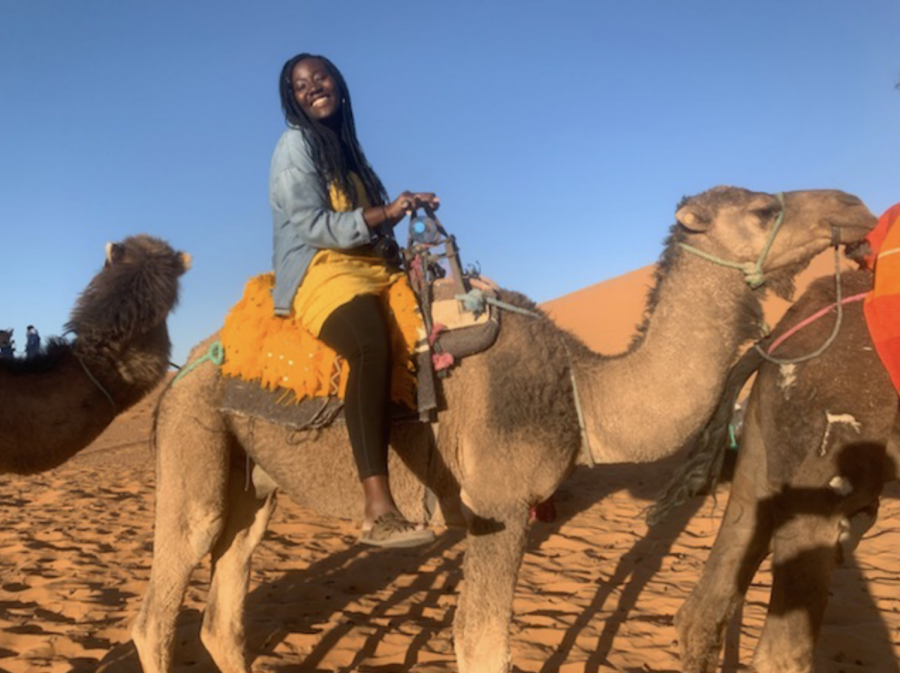 Jinui Thomas, a junior from Phoenix, Ariz., escaped the frozen tundra that Hamilton transforms into during the winter for the temperate climate of Rabat, Morocco, where she is currently spending the semester at the School for International Training (SIT) Multiculturalism and Human Rights program. She will spend most of the semester living with a host family, becoming immersed in Moroccan culture and life.

“Rabat is a sprawling city by the sea with old sections dating back to the twelfth century and new sections that are still in the process of being built. I live in the Medina, which is an old market sector of Rabat. Shops line the streets selling everything from pastries to jewelry to soaps and clothes. It’s loud, bustling, and, honestly, a little dirty, but I absolutely adore it,” Thomas said.  “It’s very different from Colgate in pretty much every way, which is honestly super refreshing.”

One of Morocco’s official languages is Arabic, a crucial part of Thomas’ decision to study abroad in Rabat.

“I chose [the program] because I wanted to learn Arabic and practice my French, while also traveling to somewhere I could learn a lot about a different culture — I’m learning so much about Morocco and Northern Africa, both in school and outside of it,” Thomas said.  “I truly cannot say a single sentence [in Arabic], but I can read the alphabet and I consider that a win.”

As part of her course schedule, Thomas spends three and a half hours every morning studying Arabic, followed by afternoon lectures on multiculturalism and human rights. The program emphasizes independence, carving out time for participants like Thomas to explore the city they’re studying in.

“Sometimes, instead of class we have field exercises where we conduct interviews with local people and [nonprofit organizations].  We have a lot of free time, which is really just an excuse to explore the city and meet cool people,” Thomas said.

Despite—or maybe because of—the drastic differences between Hamilton and Rabat, Thomas has loved her time abroad so far.

“My favorite part is definitely all the cultural experiences that I’ve gained from my homestay family and all the other people I’ve met in Morocco. Everything is so different here; we eat at different times, cultural norms are different. Every day I’m challenged to grow and change in order to adapt to Moroccan society and I love that. I love that it gets frustrating and that some days are difficult because it makes the days that are good really, really great,” she said.

While Thomas’s knowledge of French has been helpful in a country where, according to a 2018 study by the French Language Observatory, more than a third of the people speak French, the language has its limit in the country.

“I studied abroad in France during high school and I worked in South Africa last summer, but those experiences were very different from Morocco. I feel like I’m being immersed in a very different culture from my own here in a way that I haven’t experienced before. In other places I’ve traveled [to], I’ve been able to rely on my English and my French. While French has been so helpful here, it really hasn’t gotten me far in certain spaces forcing me to find other methods of communication,” Thomas said.

“Here, I live with a Moroccan family, eating Moroccan food and speaking as much Arabic as possible all the time. I would say this experience has been much more challenging than any other abroad experience, but also more fulfilling.”