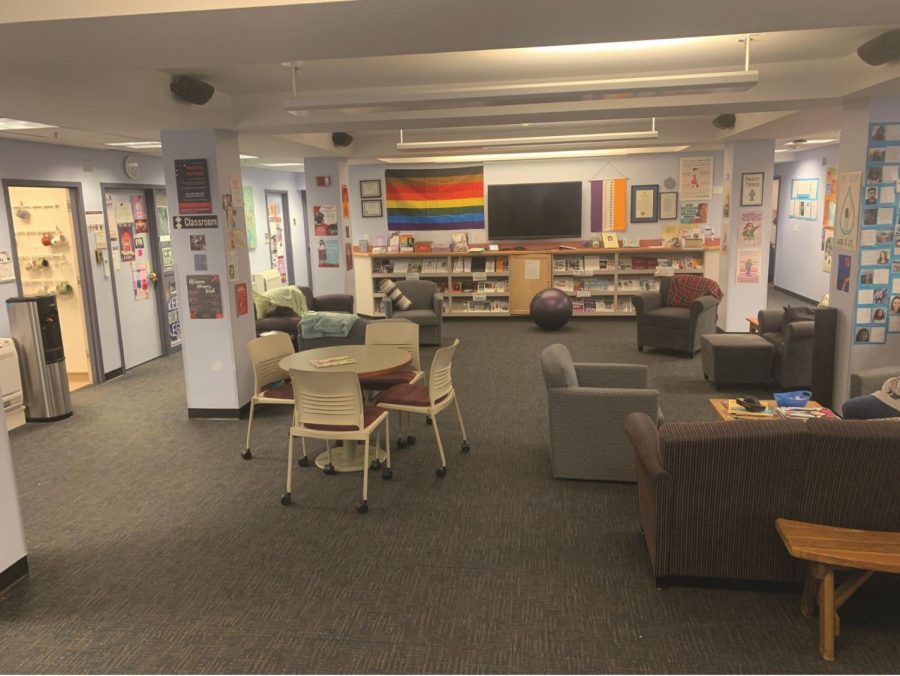 Associate Professor of Peace and Conflict Studies and Director of the Center for Women's Studies Program (WMST) Susan Thomson received a racially charged note in her WMST office in East Hall on Tuesday, Feb.11.

Associate Professor of Peace and Conflict Studies and Director of the Center for Women’s Studies Susan Thomson said she felt chilled when she entered her office on the morning of Tuesday, Feb. 11 to find a note addressed to her using a racial slur.

Thomson, who is white, said despite her initial shock, she remained focused on her work, not reporting the incident to Campus Safety until Friday, Feb. 14.

Provost and Dean of the Faculty Tracey Hucks sent an email on Sunday, Feb. 16., informing the community of the note, which  “included a derogatory message about the faculty member’s connection to people of color.”

“I’m a big believer that you shouldn’t meet hatred with being penalized. I had things to do so I kept doing them,” Thomson said.

Thomson said the focus of her work is primarily in Central Africa. She has released numerous publications on her research on post-genocide Rwanda, Kenya and on power dynamics and human rights throughout Africa. Thomson said that while she has been targeted for her work in human rights before, it has never been in such a personal manner.

“I’ve been targeted for my human rights work, that’s why I don’t understand why they chose me, like it’s someone who doesn’t know me very well. I’m more annoyed than anything. Yes, I’ve been targeted, because I’m a person who speaks up and keeps moving,” Thomson said. “I’ve never been targeted in such a personalized way. Generally, people who critique my work haven’t read it, so this feels like an attack on my person, because any attack on my writing has been ‘you’re a bad writer,’ or ‘you don’t understand anything.’ It’s been an attack on the work, which I think is different.”

Associate Vice President for Campus Safety, Emergency Management and Environmental Health and Safety Daniel Gough said that while he cannot comment on the status of the ongoing investigation into the incident, Campus Safety is using a similar investigative process to that of the incident involving a racial slur targeting a student written on the whiteboard of their dorm in October 2019.

“We’re going though the same investigation process that we went through for that [incident]. Of course, each one has its own distinct aspects to it, but typically, we do extensive interviews, we look at video surveillance, we look at card access, we promote with the campus community that anyone report anything they know, including the use of our anonymous reporting form online,” Gough said. “[Handwriting analysis] is one investigative technique that can be very useful in cases like this.”

Thomson said that while she draws similarities from the incident targeting her to the one in the fall, she feels the events have distinct characteristics.

“I think they’re different. Faculty don’t live on campus, so when you do something at my office, it’s not like you did something at my home, so when someone writes on the whiteboard of someone’s suite, that’s far more aggressive than what I had. Mine was targeted, in that they used my initials. I sign my initials ST on my emails, not every time, but sometimes. I think there’s less going on because [Dean Hucks’] email was pretty generic, which I think is right, because don’t give energy to someone who’s looking for attention in a cowardly way, and I would say the same about the event in the fall, it was someone looking for attention in a cowardly way,” Thomson said. “I’m a pretty self-contained person, that’s what I think is so stupid. So you’re gonna choose to target a faculty member who is unswayed by cowardice, so I don’t know what you expected to accomplish by doing what you did.”

“It’s so disturbing. Who does that? I trust our investigators, they did such a good job in the fall; they did it. I would ask people to have patience. I remind people that it took three to four weeks to solve the fall [incident]. These things typically take time. The desire to point fingers—I get it, I’m enraged too, but I also have to let them do their work, they have to get it right,” Casey said.

Associate Professor of Sociology Alicia Simmons said she projected a photo of the note to her students in SOCI375: Media and Politics, and facilitated class discussion surrounding the incident.“From a media perspective, we talk about the social construction of reality, and you learn about the world, you understand the world from your first-hand perspective and your vicarious stuff that you get from other people and so I feel it’s important for students to hear from other people that aren’t like themselves,” Simmons said. “I showed it to people because that firsthand experience is so important. People go pale and their mouths drop open, and that’s what it feels like and that’s what it is to bear witness.”

Simmons said she feels it is important for faculty to acknowledge incidents of this nature with their students.

“A lot of people said they hadn’t had the opportunity to talk about it in class,” Simmons said. “I think if you can find a little moment for acknowledgement, I think that’s important, and for classes that really can afford to take more space, my students were really grateful for it,” Simmons said.

Senior Megan Collier, a student in Simmons’ Media and Politics course, said she was grateful Simmons made the class aware of the incident.

“I was just shocked and I had no idea what had happened. If she didn’t show us, I don’t think I would have known,” Collier said. “It’s also frustrating that it was not communicated. The email was so vague…the term “bias incident” is very vague. The whole class was very shocked and upset about it.”

Thomson said she feels uneasy about other faculty members showing the note to students.

“I feel strange about it honestly. I shared it—I obviously have a photo of it, Campus Safety has the original. That would seem a violation of my trust to have showed the image, but if it relates to their pedagogical goals,” Thomson said.

Simmons referenced the national trend of racism on college campuses, including an incident at nearby Syracuse University, where students protested what they believed to be the University’s complacency in response to multiple instances of bias and discrimination on campus. Nearly 30 students have been suspended for their connection to ongoing protest efforts thus far, according to Buzzfeed News.

“You have some schools where race and histories and legacies of slavery are baked into the fabric. We talk about Ole Miss—that name is loaded.” Simmons said. “I don’t think Colgate is unique, but I think that Colgate does have a particular legacy, it has a particular student body, and so thinking about ways to move forward, we’ve got to be conscious of our particular context.”

This incident is the second racially motivated bias incident reported to Campus Safety this school year after the whiteboard incident in October 2019. In November 2018, white supremacist “It’s Okay to Be White” posters were put up anonymously across campus. In March 2018, the Chinese New Year decorations of two students in Drake Hall were vandalized with a racial slur.

While Gough said the University is required to publish an Annual Security and Fire Safety Report, per the Clery Act, including statistics of all Clery-mandated crimes from the previous three years, the report only includes incidents reported through law enforcement, Campus Safety, Title IX and Equity Grievance Policy (EGP) processes and mandated faculty and staff reporters. Of the previously mentioned incidents, only the Chinese New Year incident was reported in the 2019 Annual Security and Fire Safety Report, which only included reported events through Oct. 1, 2019, prior to the whiteboard incident last fall.

Thomson stressed the importance of white community members helping the effort to combat racism on campus.

“If we want a different institution, a different Colgate and we’re committed to diversity, equity and inclusion, then that work needs to be done by white people, and if white people aren’t doing the work, then what are we doing exactly?” Thomson said.