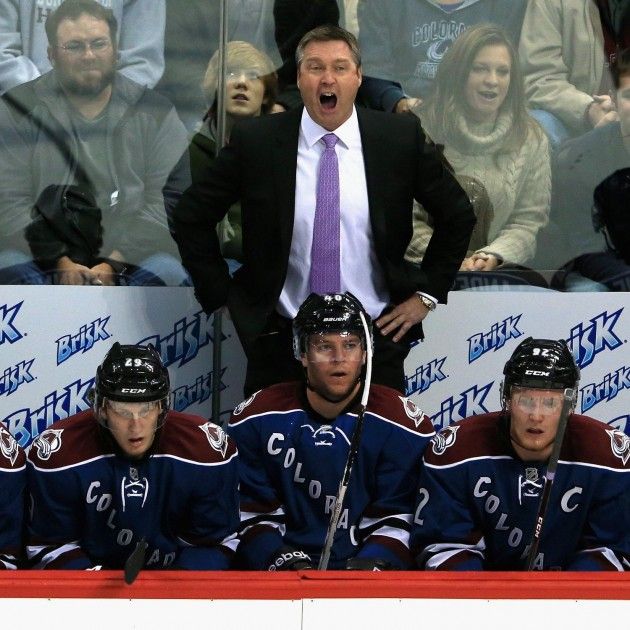 When the name Patrick Roy is mentioned, one immediately thinks of his glorious Hall-of-Fame playing career:  his four Stanley Cups, his three Conn Smythe Trophies (awarded to playoff MVP), his 11 All-Star game appearances and his three Vezina Trophies (awarded to the National Hockey League’s [NHL] top goaltender). In his 18-year career, the man they call “Saint Patrick” spent 10 of them playing for the Montreal Canadiens and eight of them playing for the Colorado Avalanche, where he won two of his Stanley Cups and 262 games. He is an almost god-like figure in both Montreal and Colorado, and when he announced his retirement from the Avs in 2003, thousands of fans shed tears. Now, Roy is back in Denver, this time as the head coach of the club, and he hasn’t disappointed. The Avalanche are now 14-2-0 under Roy and are off to their best start to a season in franchise history, sitting in first in the Central Division through a month and a half of play. Roy’s coaching performance in his return has been remarkable, especially given the situation he was coming into. After finishing dead last in the entire Western Conference last year, no one could have expected Colorado to make such a huge jump back into hockey relevancy. With Roy at the helm, though, they’ve done just that.

Aside from his amazing goal-tending skill, Roy was known for his fiery temper and intensity during his playing career. Now directing the team from behind the bench rather than between the pipes, he has brought that same attitude to the youthful Avalanche squad, and they’ve embraced it. With young stars like Matt Duchene, Nathan Mackinnon, and captain Gabriel Landeskog – age 22, 18 and 20, respectively – the Avs have reflected Roy’s aggressive nature, out-skating, out-hitting and out-scoring their opponents in nearly every game thus far.

While Roy has pretty clearly been the coach of the year thus far and has been the catalyst behind the huge improvements in Denver, the two men on the ice who have made all this success possible are goaltenders Semyon

Varlamov and Jean-Sebastien Giguere. Varlamov is the starter out of the two, having played 11 games to Giguere’s five, but both goalies have played extraordinarily well. Despite their offensive firepower and their tenacity on the penalty kill, Colorado has actually allowed an average of 32 shots per game, which is seventh worst in the league. Varlamov and Giguere have stood up to the challenge in a big way, however. Through his five games, the 36-year-old Giguere is first in the NHL in goals against average, save percentage and shutouts. Varlamov has been facing off-the-ice legal issues, but that hasn’t seemed to affect his play too much, as he still boasts a .936 save percentage with nine wins and a 2.00 goals

The question that everyone seems to be asking then is this: can the Avalanche continue their winning ways while being out-shot in half their games? Though it’s a lot to ask of a goaltender, I think they can. Varlamov is one of the best young goalies in the game, and Giguere compliments him wonderfully, coming in every third game or so to get a win, then handing the reigns back to the youngster. Also, the young talent on the roster is only going to improve as Mackinnon gets more used to the NHL, Landeskog continues his development into a superstar, and 22-year-old Ryan O’Reilly and 25-year-old Erik Johnson get the experience they need to become potential All-Stars.

If this were a one-man show with a single goalie shouldering the entire weight of the team, I would be concerned for the Avalanche. But that’s not what they are. Though there are obviously holes on defense that have forced Varlamov and Giguere to pull more weight than usual, the Avs are a team full of skill that will continue to blossom as the season progresses. With Roy behind the bench, a stellar duo between the pipes, and young stars leading the offense, the Avalanche will be a top seed in the playoffs at regular-season’s end.