Women’s Lacrosse Takes Down UVM; Improves to 2-0 on the Season 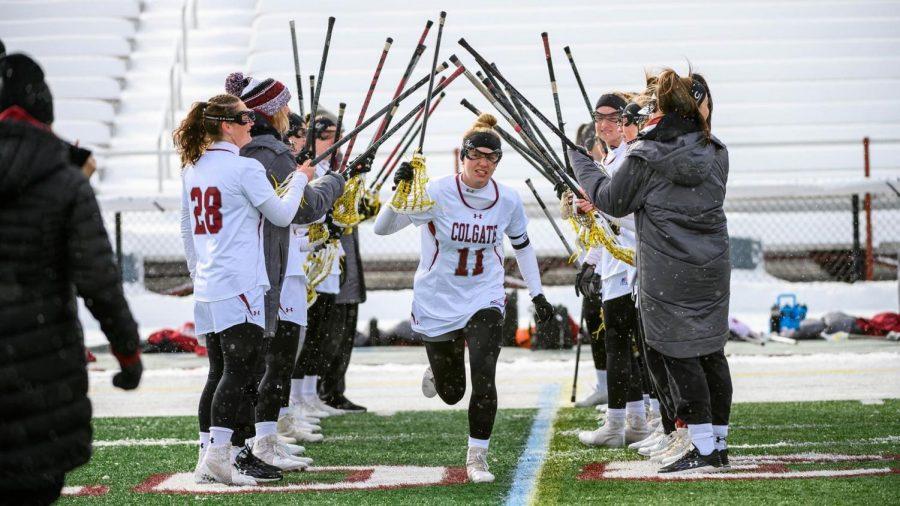 After opening up the season with a home win against Marist, the Colgate women’s lacrosse team travelled to Burlington, Vermont this past weekend to take on the University of Vermont Catamounts.

The Raiders came out strong and fast with senior midfielder Noelle Patterson scoring two minutes into the game to give Colgate a quick lead.

The Catamounts responded less than a minute and a half later though with a goal of their own, tying the game at one goal apiece.

However, the Raiders answered right back with a three-goal run, including two more goals by Patterson, giving her a hat-trick in the first eight and a half minutes of the game.

The Catamounts answered right back with two goals of their own, shrinking Colgate’s lead to just one. With less than six minutes to go in the first half and still clinging to a one-goal lead, the Raiders rattled off four straight goals to take an 8-3 lead heading into halftime.

Coming out of the locker room, the two teams traded goals inside the first two minutes of the half, with Patterson scoring her fourth goal of the game, a new career high for her.

First-year Eliza Sutter scored again with 21 minutes left in the game and gave the Raiders a six-goal lead, their largest of the game. After a 10-minute scoreless drought, Vermont first-year midfielder Ava Vasile ripped off a quick natural hat-trick in three and a half minutes to pull the Catamounts within three.

The Catamounts would add another goal with four minutes to play, but they were not able to close the deficit to more than two.

Despite the offense failing to find the back of the net in the final 20 minutes of regulation, the Raiders would go on to win by a final score of 10-8, surviving their first road test of the season.

“We struggled to finish offensively in the second half and needed to capitalize on some plays. Our sticks weren’t as sharp as the first half, but our defense was a force that kept us in it. It is nice that we have several players who can help carry the burden of the midfield and that we are generating offensive output from different players,” first-year head coach Kathy Taylor said.

While the win was not perfect, Taylor was still satisfied with the fight and determination her team showcased throughout the day.

“This was a great road win for us, especially considering the adversity the team faced in rescheduling and with weather delays. The team had a long day waiting it out, but it was something we overcame to come home with our first road win,” Taylor said.

In addition to Patterson and Sutter, other standouts for the Raiders included junior midfielder Danielle Van Calcar, who followed up her six-goal performance last week with another two goals this week, and senior attack Payton Gabriel, who tied her career high with three assists.

The Raiders return to action Monday Feb. 24 at 5 p.m. when they take on their in-state rival, Syracuse University, at the Carrier Dome at Syracuse.