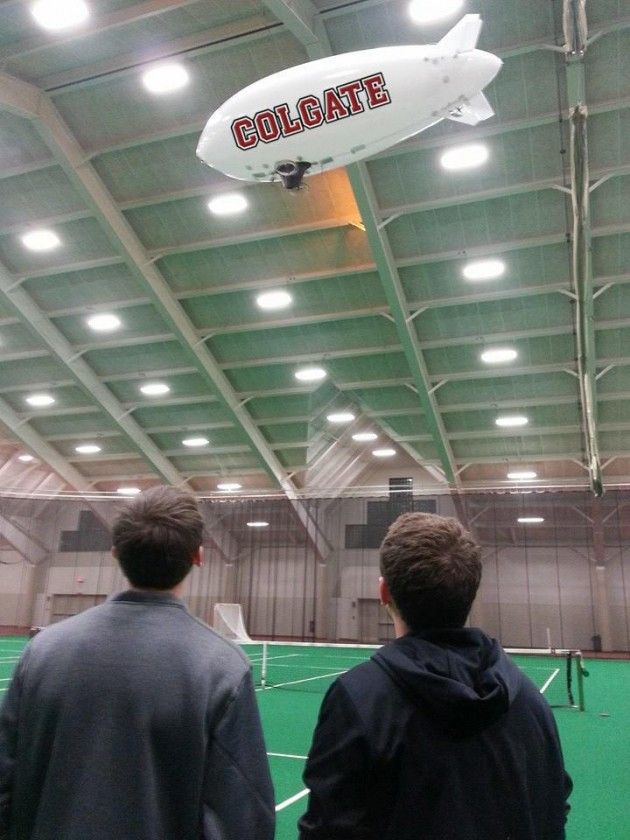 Colgate’s Aviation Club recently invested in a blimp to add to its array of planes and flying devices. This blimp, or dirigible, as it is technically called, is about the size of a small car and has an LED lighting system that can flash different colored lights with a strobe-light effect. The blimp took one of its first public flights in the Sanford Field House over Family Weekend, when members of Colgate’s Aviation Club flew the “blimp” above the indoor track.

Contrary to what many people may assume when they hear “blimp,” it is not a massive vehicle that can carry people or have anyone operating inside it. The blimp is radio-controlled by a person operating controls from the ground.

The blimp was purchased for the Aviation Club as part of an initiative to try to expand the club. President of the Aviation Club, senior Colin Shipley proposed the idea of getting a blimp as a part of his project for Thought Into Action, a program at Colgate in which students utilize the experience of entrepreneurs and alumni to develop their own innovative ideas. As a part of his project, Shipley wanted to expand the Aviation Club by bringing in alumni speakers, having more discovery flights, getting more radio-controlled airplanes and helicopters and purchasing a blimp.

The appeal of the blimp stretches beyond its appearance. According to Shipley, the blimp has many attributes that not only make it appealing to the aviation club but to other areas of Colgate’s campus as well.

“Across the university, there’s a wide array of applications that students, administration and faculty members alike can utilize the blimp for,” Shipley said.

The blimp has a special camera on the bottom of it that can live-stream footage to a laptop or a pair of glasses. This gives the blimp several different functions for departments such as the Athletics Department, the Office of Admission and academic departments. The blimp can be flown over sporting events to tape the games for highlight reels or as a way for the teams to see their mistakes. Other events that the blimp could tape include April Visit Days, Move-In Day, and Reunion Weekend.

“There are actually several academic principles that can be learned from viewing [an] overhead image from the blimp,” Shipley said.

He commented that the geology department is one academic department that expressed its interest in the blimp and wants to use the video footage to tape a demonstration of a volcanic eruption.

In addition to the camera feature, the blimp has a special drop feature. This enables it to drop items, such as t-shirts, over an event like a sports game, adding to the intrigue of this device.

The question of how such an investment could be made often comes up with the discussion of the blimp. In order to make this purchase, Shipley had to appeal to the Budgets Allocation Committee (BAC).

“After reviewing the Aviation Club’s proposal, hearing president Colin Shipley’s presentation and listening to his response to a number of very difficult and pointed questions, the BAC unanimously (which is actually fairly uncommon) recognized the long term benefit, not only to the Aviation Club but to the entire Colgate community,” treasurer and non-voting member of the BAC, who also used to be involved in the Aviation Club, senior Josh Lasker said.

The BAC said that the cost of the blimp amounted to less than a common study break or group trip to Syracuse would.

“Luckily, they saw the vision that I had for the blimp, and they approved of it,” Shipley said.

Shipley hopes to expand the use of the blimp by making it accessible for any Colgate student to fly, not exclusively those involved in the Aviation Club.

“It’s pretty straightforward to fly, and in the coming semesters, we’re going to be looking for a number of people to train on the blimp and operate the blimp at certain events, whether it be at athletic events or at events for certain clubs or other activities on campus,” Shipley said.