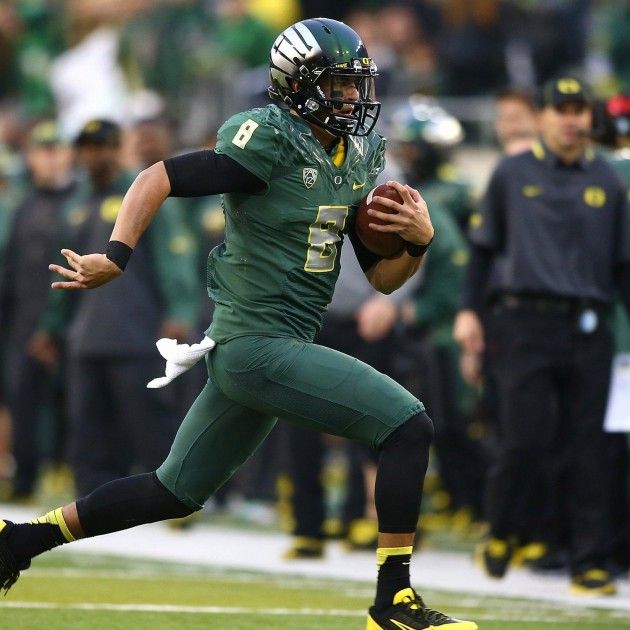 While the National Basketball Association (NBA) has upwards of 10 teams attempting to lose this season to secure the top pick in the next draft, the National Football League (NFL) has its own version of tanking going on this season. There are currently plenty of quarterbacks in college football that could change the direction of an NFL franchise, and the list is headlined by Louisville’s Teddy Bridgewater. Bridgewater has it all. He has the touch, the strength and the speed necessary to succeed at the next level in the NFL. Bridgewater has had an outstanding year so far, and his presence in Heisman trophy conversations is proof that he is authentically talented. He has led his Louisville Cardinals to an 8-1 record and has an astounding 24-to-3 touchdown to interception rate so far this year. I would expect Bridgewater to be the first quarterback off the board come this April.

Even though Bridgewater tends to get most of the media attention, there are plenty of quarterbacks that will warrant a first round draft pick, one of which is Oregon quarterback Marcus Mariota. Mariota is not your classic quarterback and would only thrive in certain situations; he plays in an Oregon offense that uses speed to its advantage. Mariota is an expert at running the option and has the agility to keep defenses honest that try to stop the option. With Michael Vick suffering from nagging injuries in Philadelphia, it would make a lot of sense for the Eagles to select Mariota in the draft and reunite him with his former coach, Chip Kelly.

The most polarizing figure in the

upcoming draft has to be Texas A&M QB Johnny Manziel. There are plenty of questions about whether his game will translate well to the NFL and whether he has character issues. One thing about “Johnny Football” is true: he can absolutely play football. Manziel is putting up remarkable numbers in the SEC, a conference that prides itself on its defense. Most notably, he put up five touchdowns against the vaunted Alabama defense early in the college football season. Don’t overlook the fact that Manziel and he has not succumbed to the pressure of winning the Heisman Award last year and has dealt with the media scrutiny that comes with the trophy incredibly well.

I would expect those three to be the top three quarterbacks in the 2014 NFL Draft, but the best quarterback in college football currently is probably Jameis Winston of Florida State. Winston is admittedly very raw right now, but the potential is there. Weighing in at over 225 pounds, Winston is incredibly difficult to bring down, and has surprisingly very good speed and agility in and out of the pocket. Winston has shown brilliance when throwing the ball this year, leading scouts to believe that he may be great one day. Unfortunately, NFL rules specify that players must have spent three years out of high school to be eligible for the draft. Winston is a redshirt freshman, so he will have to play one more year of college ball before leaving for the draft. Winston has so far led his Seminoles to a 9-0 record, including a thrashing of Miami two weeks ago in a prime time game.

We still have a ways to go before we get to the 2014 NFL Draft, but it is never too early to start looking ahead at possible selections. I believe that, if placed in the right situation, Bridgewater, Mariota and Manziel can all have successful careers in the NFL. I’m not convinced that any of them are locks to be stars. Bridgewater would be the closest, but I won’t be convinced until he consistently performs well against tougher competition. I think that all three of these quarterbacks can be successful quarterbacks in future, and as long as we’re looking ahead, keep an eye out for Winston to be the first overall pick in the 2015 NFL Draft. It’s never too early to start mock drafting.