In the Light: Meagan Adams 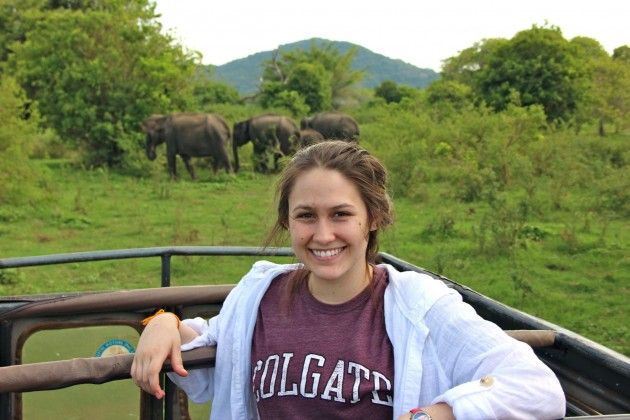 Senior Meagan Adams has made great use of her time at Colgate, becoming involved in a variety of activities as well as focusing on her academics. A concentrator in art history, Meagan has surrounded herself with ample opportunities to further her studies in and out of the classroom.

Meagan is the President of Gamma Phi Beta sorority and is a part of the Alumni Memorial Scholars program. However, these programs are not the only things in which Meagan has immersed herself. Her work at Colgate has been drastically influenced by her study abroad experience.

“I went to Venice, Italy in the fall of 2012.  It was a challenging experience, but I met some really great people and did a lot of getting to know what I enjoy academically,” she said.

Not only was her trip to Italy eye-opening, the experience deeply inspired her studies in art history.

“It really influenced my work at Colgate in that I’m now writing my art history thesis on Titian, the Venetian Renaissance painter. It also gave me confidence and influenced me in taking on my fellowship in Sri Lanka and choosing to run for President of Gamma Phi Beta as well,” Adams said.

In choosing to attend Colgate, there was more to Adams’ decision than the amazing study abroad opportunities or the abundance of activities in which to participate.

“I wanted the small liberal arts experience everyone talks about and my brother is in the class of 2012, so that was a nice plus in being able to go to college with him for my first two years here,” she said.

Even during her secondary education, Adams was always one to try new things. “In high school I tried a little bit of everything and was on a variety of sports teams, at one point playing water polo, track, swimming and tennis. My friends and I started a Fashion Club which I was pretty involved in, and I also served on our Associated Student Body executive board for a year,”

After being so involved, Adams embraced the vast array of opportunities that Colgate has to offer. She has taken advantage of the University and its openness to research and academic advancement. Last semester, Adams designed an independent research fellowship as part of Colgate’s Alumni Memorial scholarship program. She studied Buddhism and Buddhist art in Sri Lanka for six weeks over the summer and produced a video art piece about her experiences.

“The sheer independence of creating a fellowship in its entirety and then flying out there without supervision was empowering.  It was something of my own creation and I really enjoyed that. I met many unforgettable people and was able to travel quite a bit throughout the country,” Adams said.