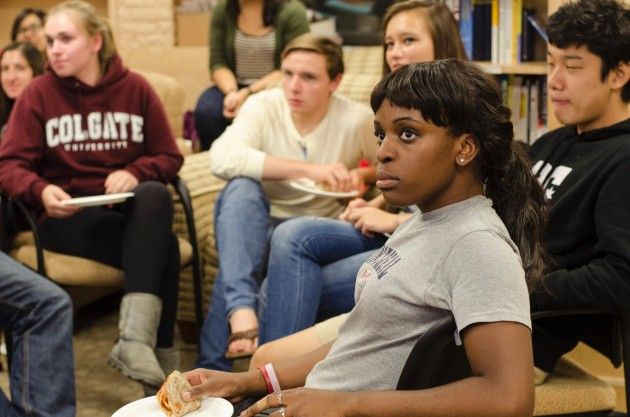 In the movie “Juno,” what does the main character originally decide to do when she first finds out she’s pregnant? Answer: what is have an abortion? What does HIV stand for?  Answer: what is human immunodeficiency virus? Where do students most have sex in their house or apartment besides the bedroom? Answer (according to a SHADE survey conducted last year): what is the kitchen?

If you knew the answers to any of these questions, or if you did not know but would be interested in learning more, you would have had a great time last Friday night at Talk Dirty to Me: Sex Ed, Jeopardy and Pizza, hosted by the Shaw Wellness Institute.

With pizza, sandwiches, drinks, condoms for all participants, the event attracted a great deal of interested students. Upon arriving, everyone was split up into two separate teams of about 10 students each and the first game of Jeopardy promptly began.

Like a typical game of Jeopardy, the first round had four different categories: female anatomy, male anatomy, STDs and contraceptives. Some of the questions were quite difficult and stumped both groups, teaching everyone important information about sex, while other questions were so simple that both teams had their hands raised (instead of hitting a buzzer) before Thad Mantaro, the Director of the Shaw Wellness Institute, had even read the entire question aloud.

After every question on the board had been answered and the points were added up, the winning team received free blue Shaw Wellness t-shirts. However, that was not all; there was still another round of Jeopardy to be played, and the chance for the second team to take home t-shirts as well.

The second round, called Sexual Health Jeopardy, consisted of five categories: modes of contraception, sex in movies, condom companies, happening on campus and SHADE survey.  The questions in this category were much more difficult; the last two categories contained real statistics from surveys of college students.

What brand sells 75 percent of condoms? Answer: what is Trojan? According to a SHADE survey, what is the main reason why students don’t use condoms? This question was the Daily Double, and the team attempting to answer this question had trouble deciding between two answers. They finally settled on “because they don’t have one,” which turned out to be wrong.  Instead, the correct answer was their second choice: “it feels better without one.”

Team number two came back and won the second round of Jeopardy, taking home t-shirts alongside team number one. Throughout the Jeopardy rounds, and at the end of the event, Shaw Wellness Institute Director Thad Mantaro also shared some facts about Colgate campus in general. For instance, did you know that 25 percent of Colgate students have had zero sexual partners in the last 12 months? After sharing some facts, Mantaro put on some music and allowed everyone to talk and relax for a bit; it was a great end to an entertaining and educational evening.