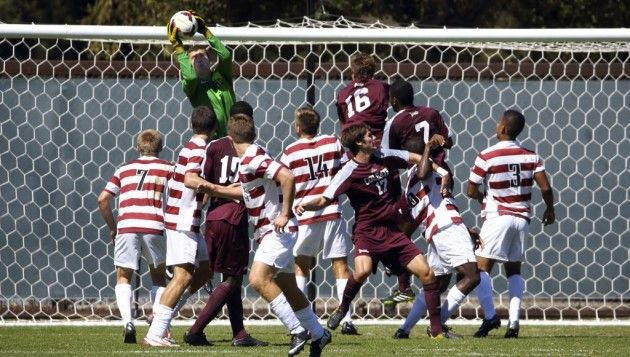 This past weekend, the Raiders made a trip to California for two games against Stanford and U.C. Berkeley. The Raiders’ offensive woes continued to plague them as they failed to score any goals. Although it may seem bleak, Colgate arguably faced its toughest competition of the year. Cal is the fourth-ranked team in the nation, sporting a record of 4-0-1, while Stanford (4-1-1) has gotten off to an equally fast start.

In their first game of the weekend, the Raiders (1-7-0) faced the Cal Golden Bears in Berkeley, California.

The opening five minutes saw two Raider shots on goal. Junior Chris Campbell had an opportunity to score when he took a shot from 30 yards out but missed wide right. Their following opportunity came three minutes later when first-year Ethan Kutler fired a ball from 18 yards out, but missed the top right corner.

Brown made several saves in the final minutes of the first half, limiting Cal’s lead to one goal. The Raiders came out guns blazing in the second half when Kutler notched another shot on goal via a redirected cross.  Cal’s goalie Justin Taillole was forced to make a diving save to prevent the ball from finding the back of the net.

Shortly after Kutler’s shot on goal, Colgate had another chance to score when junior Tanner Schilling found space between his defenders and launched a shot towards the top-left corner of the goal. Colgate, again, was denied its first goal when Taillole made another diving save to maintain his team’s 1-0 lead.

Colgate’s hopes for victory were dashed when, just two minutes later, Cal’s Sefano Bonomo found space behind the Raider defenders and launched a shot which reached the back of the Raider’s net.

Although the Raiders managed to find some opportunities to score, they failed to put any balls in the back of the net. The game was secured for Cal in the 76th minute when Steve Birnbaum scored the Golden Bear’s third goal of the game.

For their second game of the weekend, the Raiders traveled down to Palo Alto to take on the Stanford Cardinal.

Colgate had its first chance on goal in the fifth minute of play when rookie Zach Tamen headed a cross towards the net. Unfortunately, the shot was stopped by Stanford goalie Drew Hutchins, who made his first save of the day.

In the latter portion of the period, Colgate junior keeper Liam Stapleton succeeding in making a flurry of brilliant saves which helped keep the game even at zero heading into intermission. In the final minute before halftime, Raider defenseman Zach Tamen, found an opening past the Cardinal defense and fired a hard shot on goal, missing wide right.

Following the scoreless first half, Stanford found itself with an excellent opportunity to score. The Cardinal’s Jordan Morris was in the midst of scrum with the chance to fire a shot on goal. Morris rallied to find the ball between the legs of his teammates and defenders and shot the ball into the outstretched arms of Stapleton. The ball then ricocheted off of the Raider keeper’s arms and towards the eager leg of Stanford’s Eric Verso, who then shot what would become the game winning goal.

Shortly after Stanford’s first goal, Colgate’s Ethan Kutler looked to tie the game at one. Kutler fired his shot from a set piece but hooked it past the Stanford defenders but into the hands of Hutchins, who made his second save of the day.

Stanford attempted to add to its lead when Morris redirected a one-timer from the 18-yard line, but failed to put it past Stapleton. The goalie had a career day, notching seven saves and limiting Stanford to just one goal.

The rest of the second half proved unfruitful for the Raiders, who were held scoreless in their second straight game.

“Reflecting on our first eight games, it is not where we expected to be record-wise going into the league,” head coach Erik Ronning said. “We have played some great teams and have played in some really tight games. We are a quality team and I am confident moving forward.”