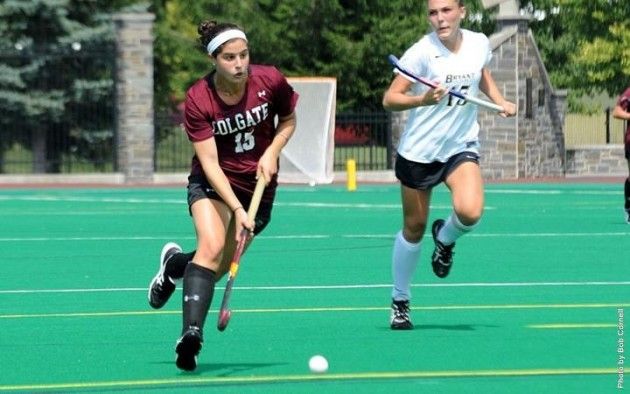 This past week the Colgate women’s field hockey team faced two tough opponents and picked up two close losses, one on the road and one at home.

The Raiders started their season opener at Tyler Field and got out to a quick lead against the Ryder Broncs.

Junior Eliana Brown, who was a preseason all-league selection, scored the first goal of the season. Taking the pass from senior Olivia Nabhan, Brown shot a hard ball past the diving goalie to give the Raiders the early lead.

Despite the Broncs holding an 11-2 shot advantage going into halftime, the Raiders stayed on top thanks to great play by junior Amanda DiDomizio in goal.

With just over 15 minutes left, the Broncs took the lead and tallied another only seven minutes later to give themselves a 3-1 lead. On the Raiders’s second penalty stroke of the game, junior defender Giuliana Kafaf scored to cut the lead to one.

With a Raider penalty corner in the final seconds of the game, the Raiders had one last chance to win, but senior Kelsey Jensen’s shot was blocked and the Broncs took the victory 3-2. DiDomizio’s effort in goal was fantastic, saving 14 shots.

With their first game behind them, the Raiders looked ahead to their second game. Travelling to Smithfield, RI, the Raiders took on the Bryant Bulldogs and dropped a heartbreaking battle in overtime, losing 4-3.

The scoring began just over 11 minutes into the game when Brown took a pass from senior midfielder Meredith Gibson. The Bulldogs, however, tied up the score with 12 minutes left in the half, scoring on a penalty corner.

At the half, the Raiders held a 5-3 shot advantage and had two corner chances to the Bulldogs’s one.

As the second half began, however, the Bulldogs quickly picked up the pressure and got four penalty corners, resulting in their second goal of the game with less than 25 minutes to go. The lead did not last long, however, as Brown scored off another penalty corner to tie the game. Jensen picked up her second assist on  the season.

the Raiders up 3-2, but the Bulldogs scored just over a minute later to tie the game

again. The Raiders had a chance late with a penalty stroke but could not covert, sending the game into overtime. Just over a minute and a half into overtime, junior Rosie Bird completed her hat trick, giving the Bulldogs the victory.

Next, the Raiders will take on Robert Morris and Ball State.