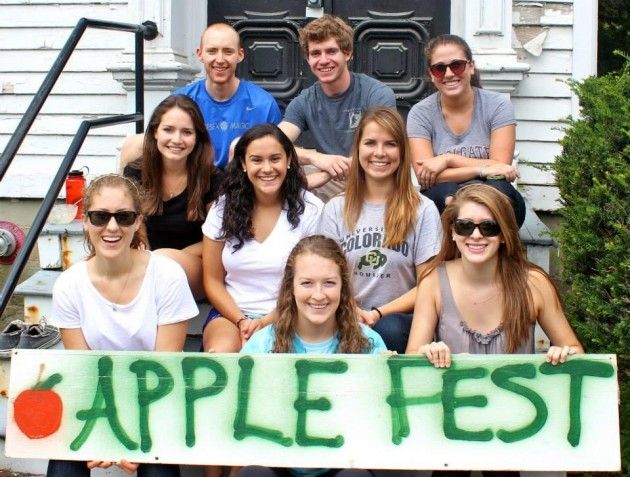 Last weekend, Homecoming was marked by many festivities, including the annual AppleFest at the Loj. AppleFest is a celebration of all foods apple and was once again a huge success. Nearly seven bushels of apples went into all the treats.

All the food for AppleFest is baked by the residents of the Loj, an environmental and outdoor interest house located on Broad Street. The members of the Loj worked tirelessly to bake all of the apple-filled sweets themselves, beginning their baking endeavors Thursday night. But with over 300 people showing up, all the apple pies, apple muffins, apple cookies, apple cider, apple sauce and apple crisps disappeared in just over an hour. Some students expressed disappointment in missing out on the apple-filled festivities, since the baked goods were gone far more quickly than anyone anticipated. By the end of the event, members of the Loj were handing out leftover apples to passerby in an effort to maximize apple distribution. Anyone trying to score some free apple pie next Homecoming weekend should definitely get there as quickly as possible to beat the rush from the early crowd arriving from the Farmers’ Market.

No one knows for sure exactly how long AppleFest has been a staple of autumn at the Loj.

“AppleFest has been a tradition practically since the dawn of time,” senior Sarah Dickson said.

In keeping with the Loj’s environmental theme, all the apples were harvested from the local Stone Brothers’ Orchard in an effort to promote local produce and decrease the environmental impact from transporting foods cross country.

Because the Loj received funding for the event from the Broad Street Association, the residents were able to put on AppleFest at no cost to students. Such a great deal attracted students of all years, alumni and even a swarm of bees.

The sugary apple sweets, bobbing for apples and friendly atmosphere were all a huge hit and everyone who stopped by agreed that it was a great way to kick off the start of the Fall.

“As the falling leaves settled to the ground, five slices of apple pie settled in my stomach,” first-year Missy Velez said.