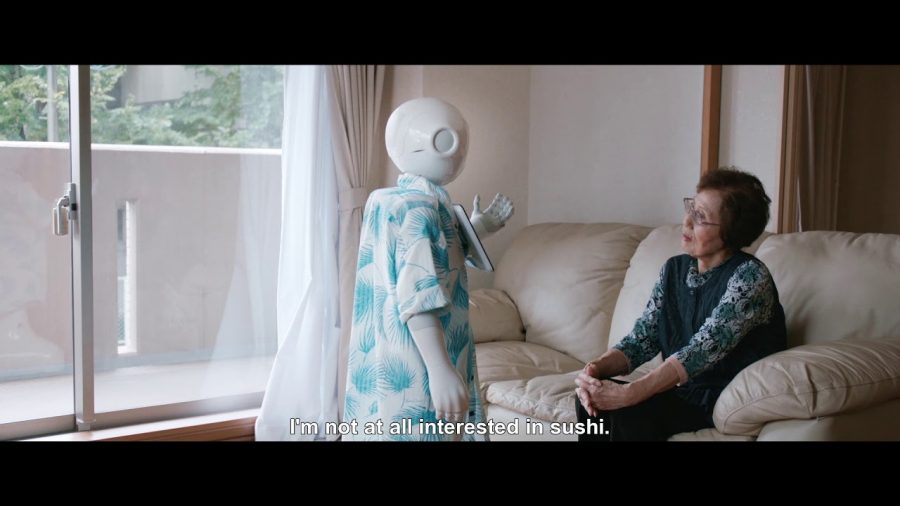 The Film and Media Studies Friday Night Film Series screened the documentary “Hi, AI” in Golden Auditorium on February 14. Written and directed by Isa Kilinger, the film was released in March 2019, and recieved the Max Ophüls Award for Best Documentary and the German Films Awards nomination in the same category.

The personal relationships between artificial intelligence (AI) and humans have been explored many times over in film from “Bladerunner” (1982) to “Her” (2013). However, what seperates “Hi, AI” from the rest is its documentarian nature. For instance, the film uses technology that already exists today, giving it a powerful look into how far technology has progressed as well as the personal relationships that are already forming between the human and non-human world.

The film follows two cases: an elderly Japanese lady named Sakurai, who is kept company by a cute robot named Pepper, and Chuck, an American man on a road trip with a sex robot named Harmony.

Their conversations reveal that AI has a long way to go until being nearly identical to a human. The responses of the robots are often stilted, clearly pre-programmed or confusing.

However, what is remarkable about these two cases is that both Sakurai and Chuck seem unbothered by the company they lack in these obviously manufactured robots.Chuck picks Harmony up from a factory—showing how aware he is of what she really is. The difference between their capacities for conversation is painfully obvious, yet he treats her as a human and asks how she’s feeling. Chuck even asks her if she’d like to continue to be friends. There is a particularly ironic scene in which Chuck would like her to be less submissive and then proceeds to change her personality settings himself, and much of the dialog between them is borderline comical.

Pepper seems to ignore many of the things Sakurai says, indicating a lack of understanding on the part of the robot, but she treats him as she would any human child, even trying to sing a song with him.

However, these relationships may not be as absurd as they seem. Humans already attach human-like qualities to lifeless things. Personal assistants like Siri are often talked about as if they are human, and objects like stuffed animals are cared for as close friends by children.

Aside from the personal stories, the film also cuts to scenes overlaid with a conversation between philosophers Sam Harris and Kate Darling over the future relationship between humans and robots. To the philosophers, robots will surpass all human capacities.

However, they raise the question of what it means for a robot to have consciousness. The relationship between AI and humans is an especially fascinating topic considering we are their creators. These conversations in combination with the personal scenes leave the viewer thinking about how robots will affect us both individually and as a society.

Although the robots in the film are more rudimentary in comparison to vivid science fiction imaginations of robots one might see in movies, the ways we interact with them in the present day are not as far off as one might think.